After a very successful Kickstarter Campaign and a year of Film Festivals, we are so excited to share the film with the entire world! Thank you to everyone for their support of this amazing project!

IF YOU ARE IN A REGION WHERE YOU STILL CANNOT, FOR SOME REASON, VIEW THIS FILM PLEASE EMAIL TRISTANPOPE@GMAIL.COM AND WE WILL GET YOU SQUARED AWAY!

Romance in NYC is a PoV perspective of the Boyfriend and his Girlfriend taking you on a journey through their life enjoying an everyday in NYC, but capturing the tiny nuances that are romance, even in the most mundane situations, with NYC as a beautiful backdrop.

The goal is to give you the feeling of ‘I remember that’, from one relationship or another, to ‘I want that day’ without going over the top
cheesy… balancing romance and realistic situations.To achieve the right intimate, candid feel it was shot entirely on an iPhone 6.

I have been writing about relationships and romance for years. A stream of consciousness of my own experiences, sharing it with others to show they are not alone, or that we can have those moments, we can aim higher, we can put as much effort into love as we do our careers. Being able to share that same open book approach to romance with my writing via a short film has always been a dream of mine.

For years I had been sitting on an idea for a film that could capture that “everyday” between a boyfriend and his girlfriend. I have notes all over my journals and in documents on my computer dating back to 2007, each with a different moment from a day that I loved and wanted to re-create. I have loved to shoot home videos ever since I was a young boy. I was always the person who captured the family movies and was able to do so in an inconspicuous way that really captured, in my eyes, the essence of my family. This bled over into my relationships; I would capture small moments during a relationship
and after awhile I had enough to cut together a cute romantic piece that could depict our love for one another over the months or years we had been together. It was these small moments of each day that made a pretty montage. Being inspired by that relationship and randomly filming clips on my phone of our days and ending up just throwing together a cute video for her when she went away for the holidays kept me going, knowing it could be done, and ultimately sparking that light in my brain that the iPhone may be the best weapon of choice. But these were snippets, tiny moments, not telling a complete story, but a feeling. It was intimate, cute, and very personal. I wanted this to feel the same way, but dressed differently, as a complete story from beginning to end.) What I wanted was an entire day!

The goal was to give the feeling of ‘I remember that’, from one relationship or another, to ‘I want that day’ without going over the top cheesy… balancing romance and realistic situations. Thus Romance in NYC was born and we began our extremely successful Kickstarter campaign to share with the world just that, a full day, no hooks or catches(such as a proposal video might do), starting from waking up in the morning to going to bed at night. The film is a PoV perspective of the Boyfriend and his Girlfriend taking you on a journey through their life enjoying an everyday in NYC, but capturing the tiny nuances that are romance, even in the most mundane situations, with NYC as a beautiful backdrop.
Ultimately I knew shooting this film on an iPhone would require a very strong story, but the very nature of the film required there to be less script and more situations that would inspire improvisation. Even more importantly was casting someone who would be comfortable with such an up close, intimate way of shooting, on a subject matter that required trust and a special connection with the camera itself. Rachael McOwen was absolutely brilliant with her ability to be saying, “Oh I forgot, I am supposed to pretend that I like you”, while crawling into “the boyfriends” arms and looking into the camera lens for a perfect shot. She had this uncanny ability to talk to me as the director but keep eye contact with the camera as if it weren’t even there.

This was a challenge for me, because I like to layout the work ahead of me, but without a script in hand, and only a breakdown/general outline I had to go into each scenario with a deep sense of trust in my cast and crew. Many times I did not know how each shot may turn out, but trusting that I and my cast had experienced or heard of someone experiencing those “moments” in all the places we filmed, and were able to breath life into it was what got me through each day. We had a general outline, getting us from point A to B, but the true magic happened when we were tired, spent from the days of shooting, and just interacted naturally. Keeping the camera rolling for those moments was key, capturing true interactions and true friendships that we had formed, which I would say is what a real relationship is in the long run, a strong bond and friendship.

With an extremely small budget and a modest Kickstarter to fund us, we pushed forward pushing the film dates until we finally couldn’t wait any longer without losing the fall weather and being unable to shoot due to the cold, not to mention changing the films entire feel. We ended up shooting majority of the film prior to our Kickstarter being fully funded just so we could get those perfect environmental moments and beautiful NYC foliage.
The iPhone’s limitations such as low light and certain situations made looking at dailies a scary exercise in not being OCD. But as we continued to shoot I realized it wasn’t about the grain in a shot but about the way Rachael would look into “the boyfriends” eyes and how we could use the iPhone’s limitations to our advantage, maintaining the suspension of disbelief during post, with some truly interesting and unique cutting sequences. It allowed us to be a bit more experimental with our story but still bringing the viewer on a beautiful journey through this day that we now call: “Romance in NYC”. Ultimately we were able to utilize the most advanced mobile technology to capture one of the smallest nuances of the human experience, Romance. 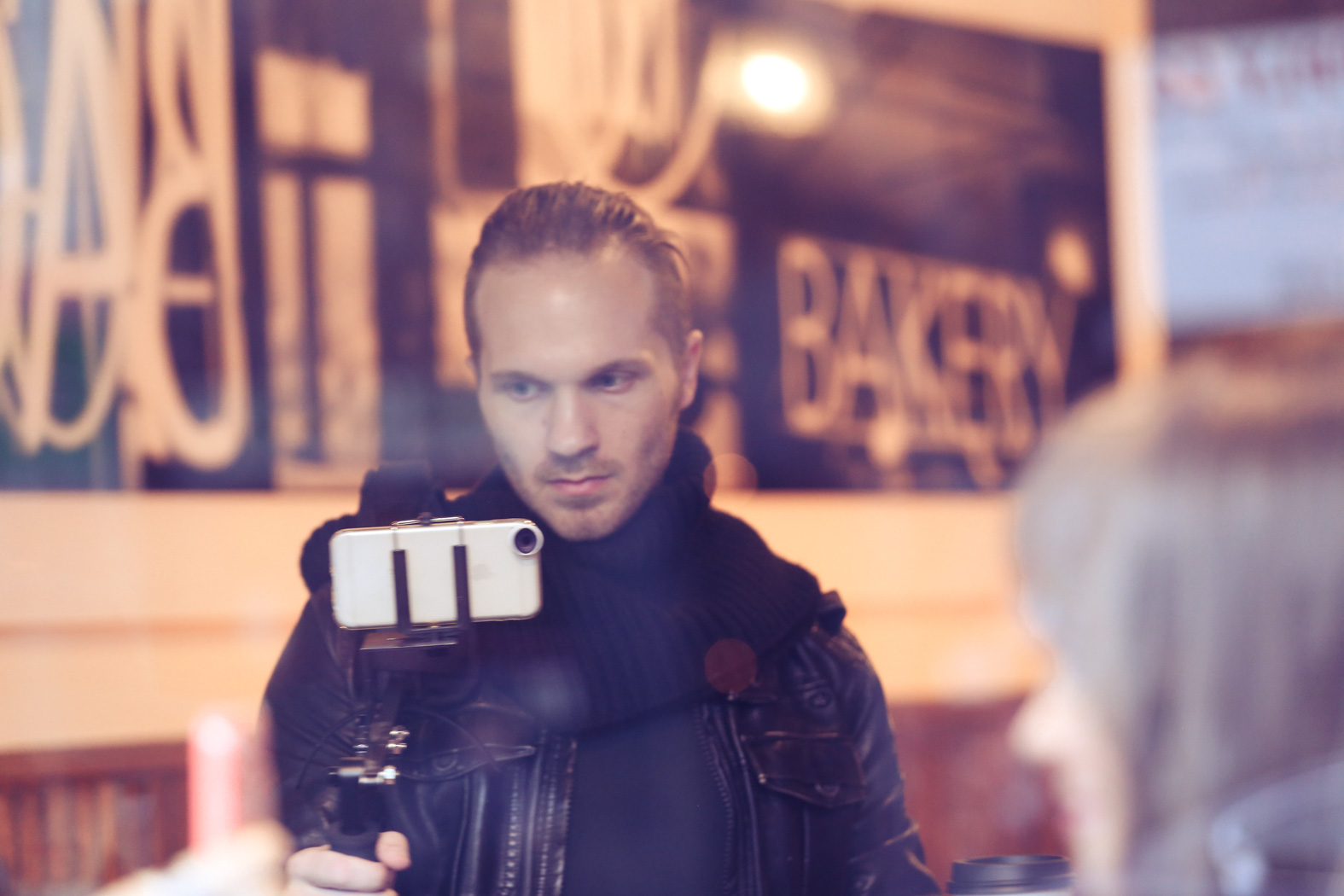 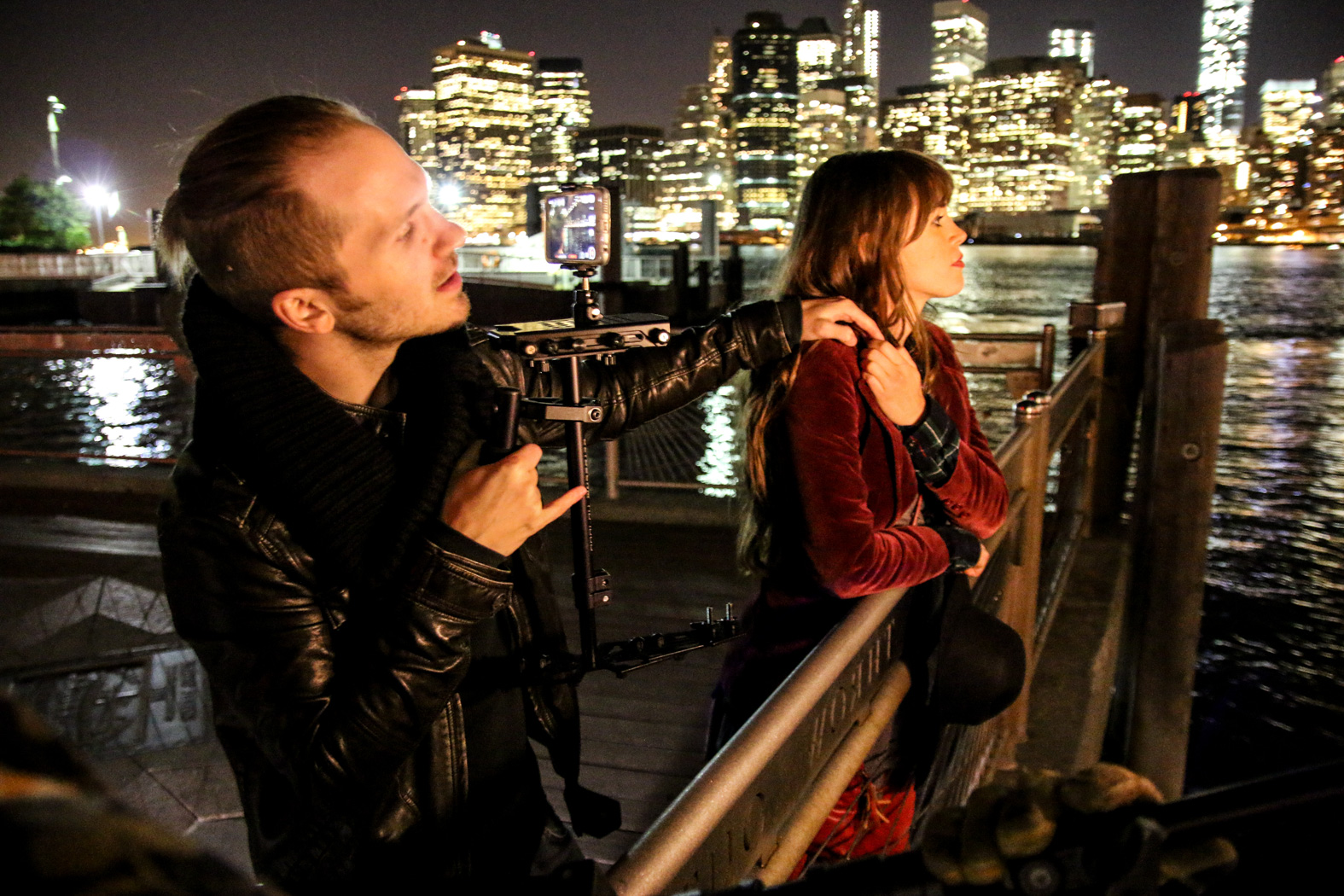 Since this film was shot entirely from the perspective of the boyfriend we wanted a way to seamlessly integrate a natural feel to it. We wanted it to almost be subconsciously established quickly that this is “the boyfriends” PoV. The issue we ran into though was that, as the director of photography holding the camera and being “the boyfriend” I was limited to only having one hand in the shot at a time, however we were able to find creative ways to hold the camera over my body, with my amazing production assistant Natalie Johnson holding the camera and clinging to me as if our bodies moved in tandem to keep the motion clear and smooth, but allowing me to use two hands to do such actions as helping “the girlfriend” put her jacket on, or laying on the couch and being able to cuddle together with two hands holding each other. While we could have had only one hand showing in most shots, we wanted the viewer to be able to connect with the idea that this truly was the perspective of “the boyfriend” seamlessly and unobtrusively. By adding these small moments where two hands were visible, it may not be recognizable right off the bat as to what is happening, but subconsciously, the viewer should start to believe the PoV more, of course not overdoing it, but using it at key moments where you just wouldn’t use one hand to perform the action in the scene. 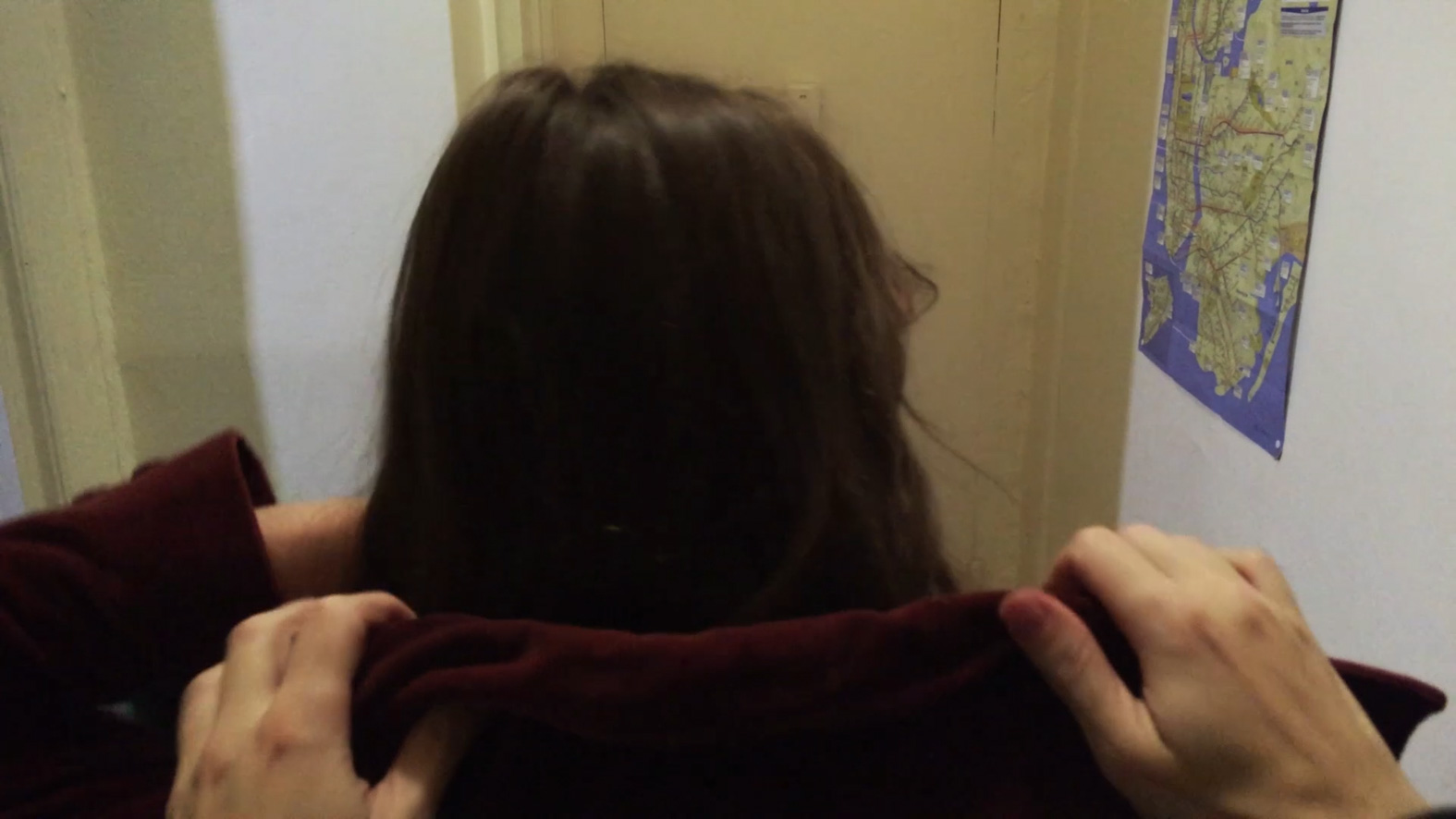 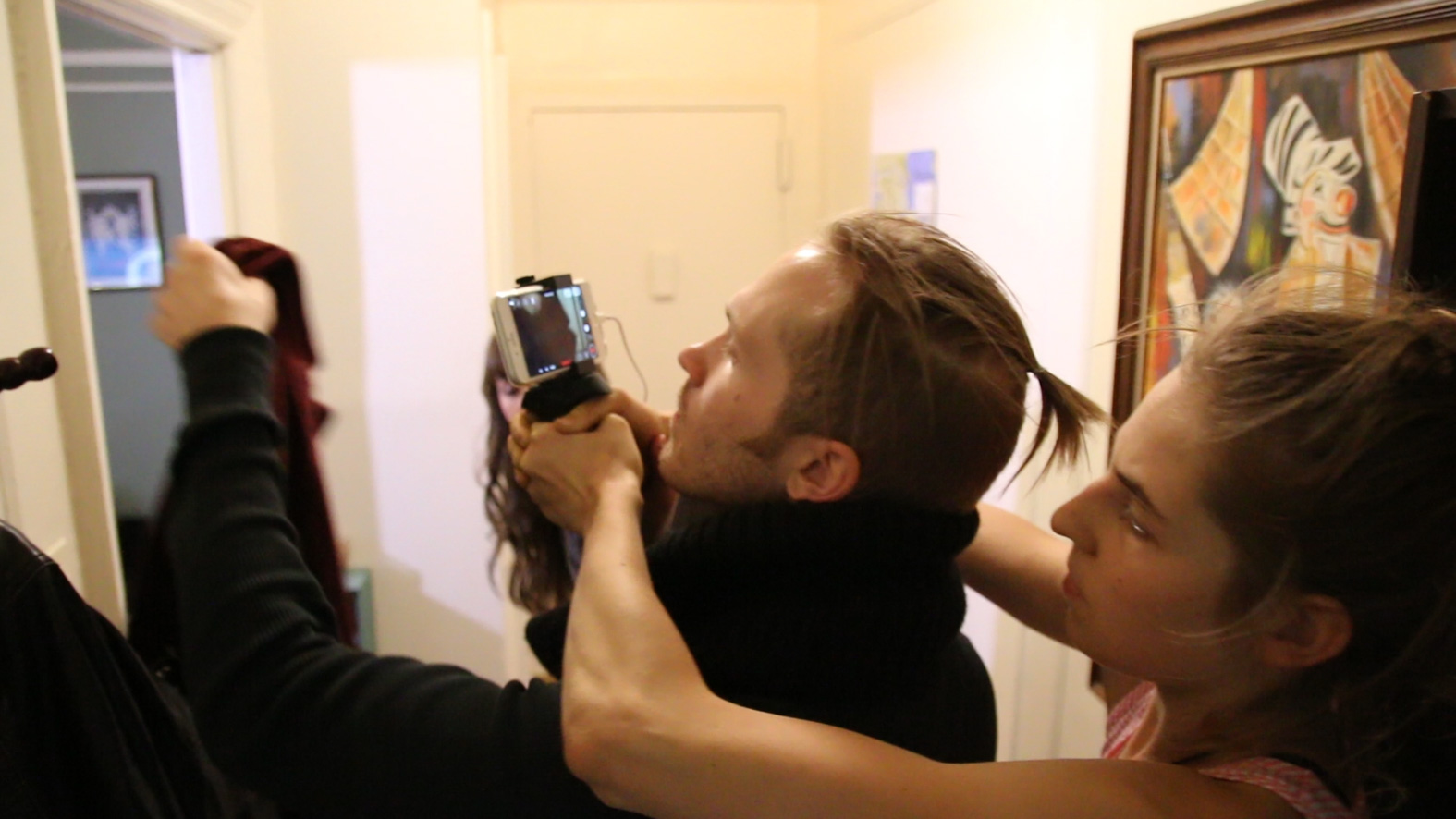 The decision to shoot with the iPhone was inspired by our previous film “Dancers of NYC”. During that shoot I saw one of the dancers running toward the sun as I was still filming. What I saw sparked in me a fire I knew I had to fuel; the ability to capture beautiful pictures on a medium that was both small in form and could capture image quality I found acceptable. Sure I own many prosumer cameras, but I always felt they were just too big and invasive for this
particular film idea. To achieve the right intimate, candid feel, I felt I had finally found my medium, the iPhone 6.

Benefits and Challenges of Shooting on the iPhone
It was a freeing experience to shoot on such a small piece of equipment. I have shot on DSLR’s and larger prosumer cameras such as the RED. They all have their benefit but the iPhone truly allowed for us to get so personal and creative with angles, locations, and intimacy. One of the biggest benefits of shooting on an iPhone is not drawing crowds or make a big fuss. We were filming a short film in multiple locations, restaurants, clothing stores, and people were walking by like we were just some crazy couple in love making a home movie. Mind you this also made it hard to explain to them if they were going to continue walking into the shot they would have to sign a release form. But ultimately it allowed myself and the actress to film as if we were in our own bubble, exponentially developing the relationship between “the boyfriend” and “the girlfriend” on film. While also allowing the creativity the room to breath with such a improvisational script.

My Mom Called
So shooting on an iPhone can have many challenges, however, there are some things you just can’t predict when your main camera is also your phone. During one of the shots, luckily not one of the better takes, all of a sudden MOM pops up on my screen and my somewhat invasive ringtone begins playing. Now normally I run it in airplane mode to save battery and reduce interruptions during shooting. But I needed it on as I was waiting for my assistant to get back to me with a prop we needed. So the, “Yes Mom, I am filming.. yes on my phone… yes the phone has a camera… no I am not in the basement.” was rather embarrassing on set.

Click for all press related news on Romance in NYC seen around the world! 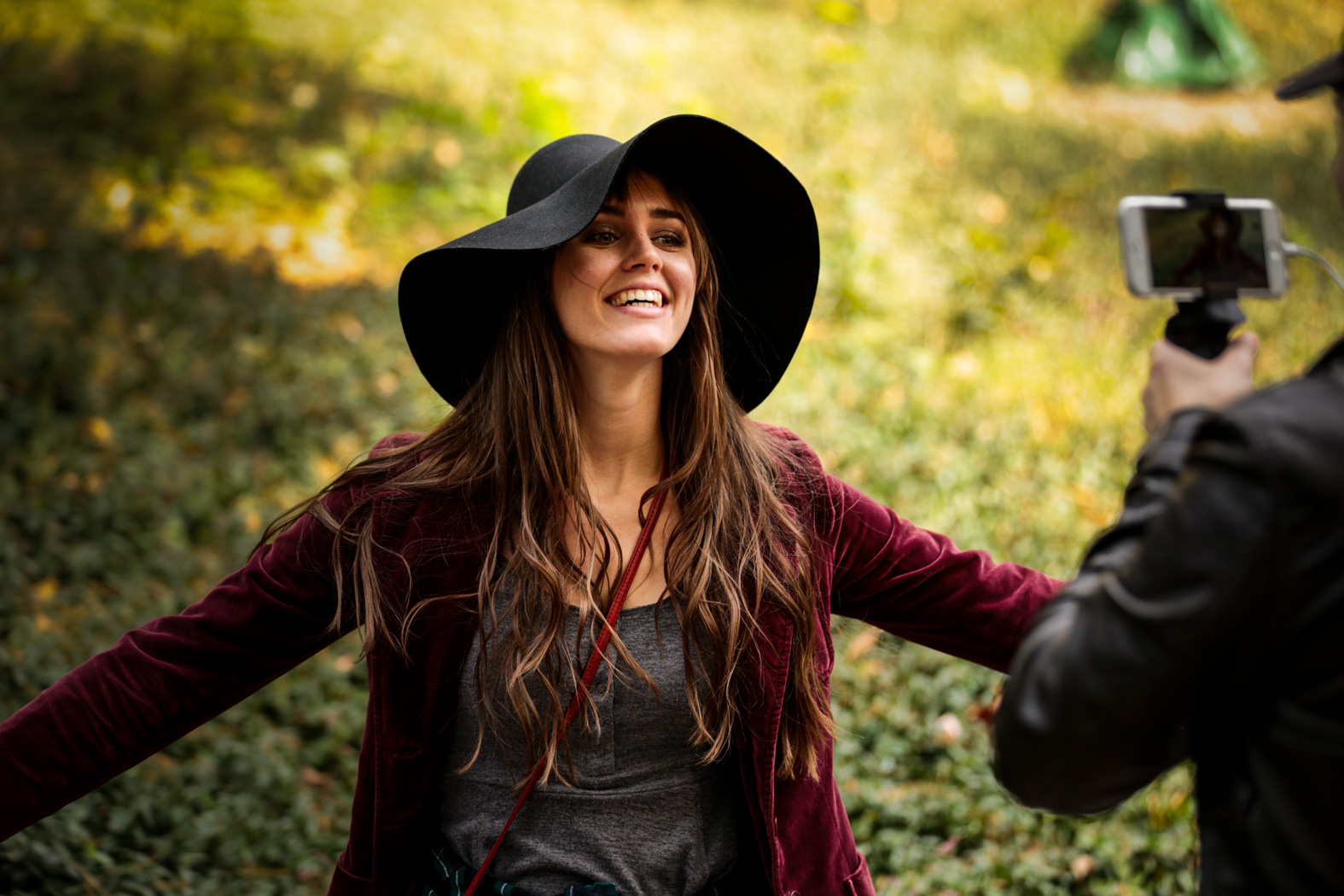 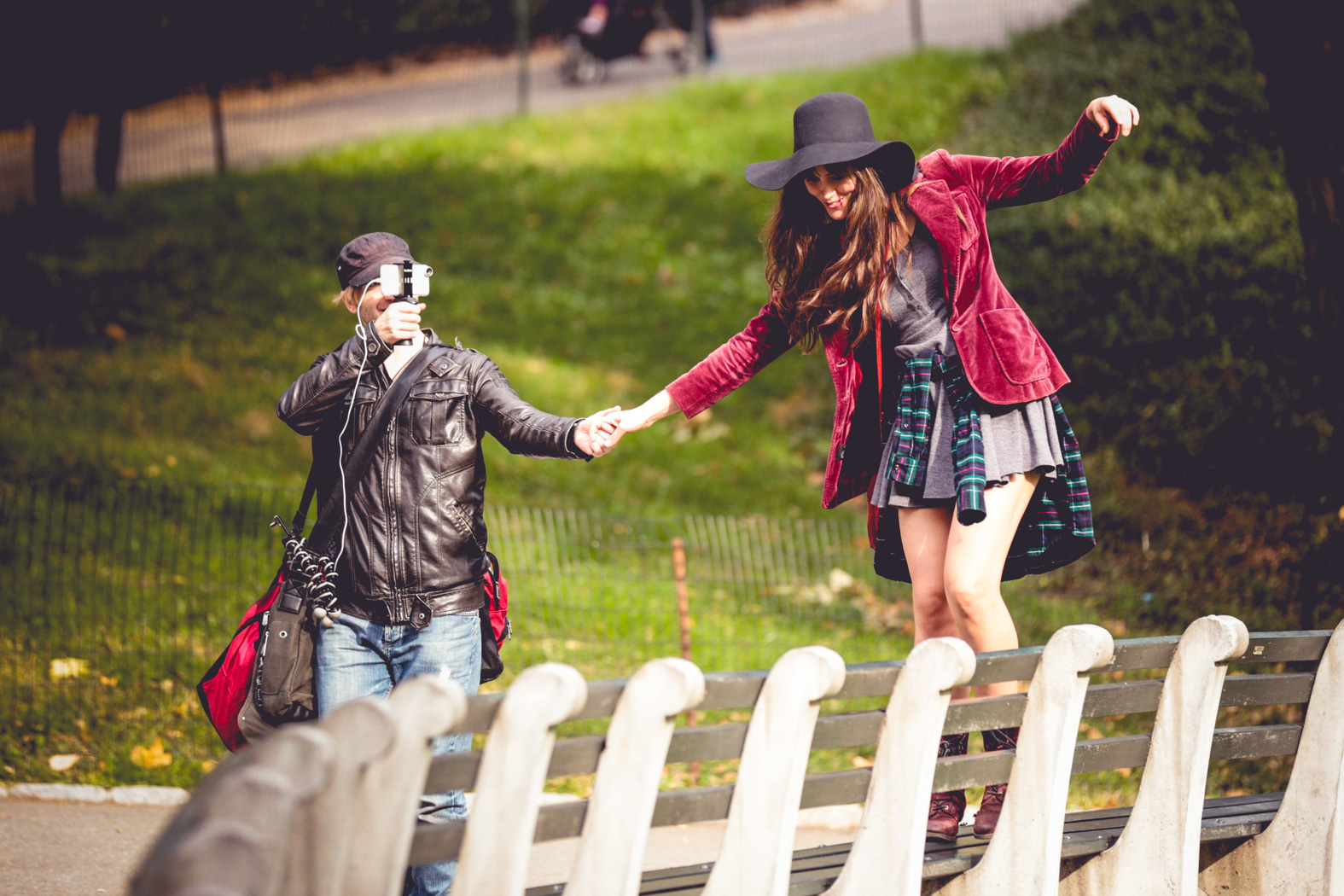 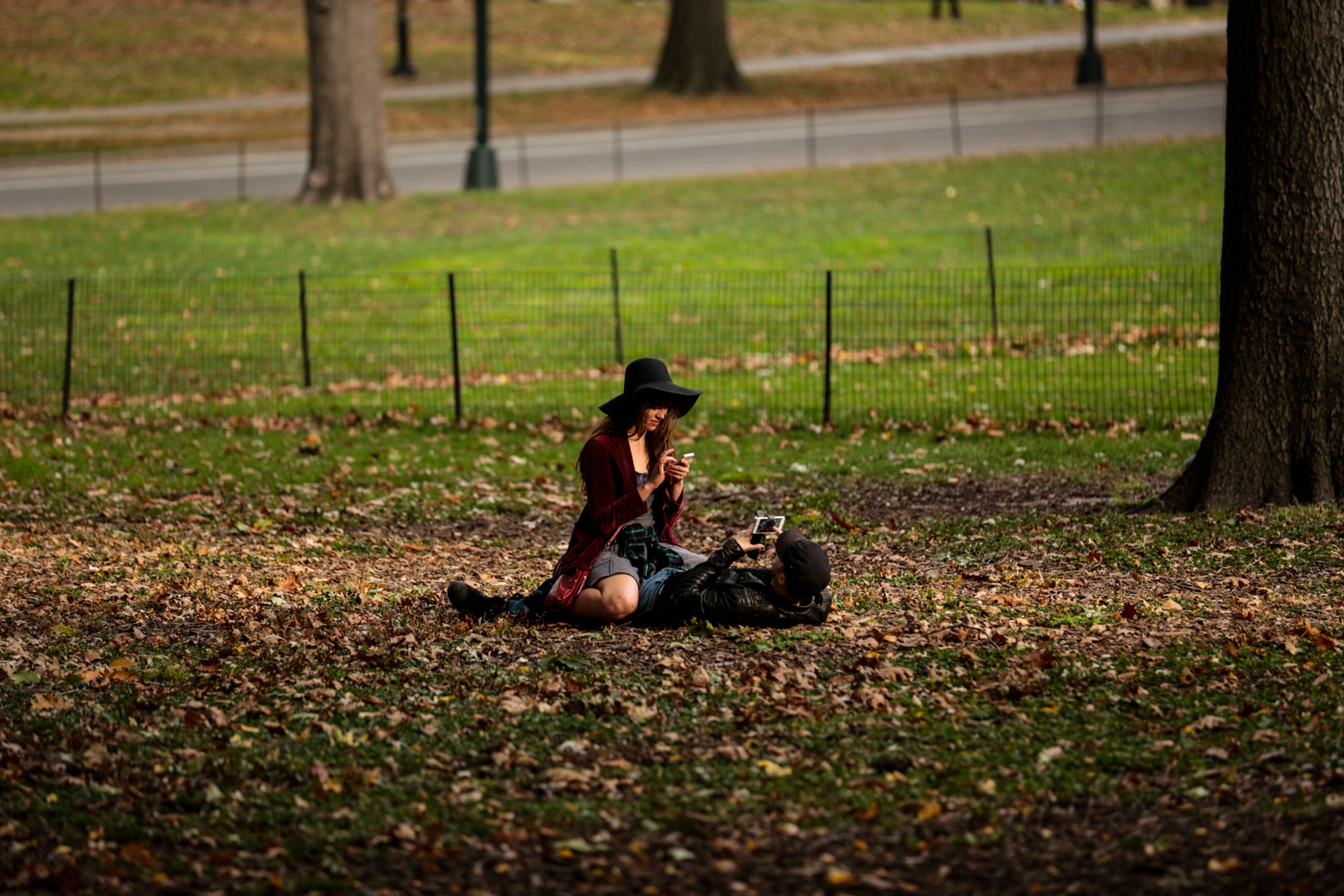 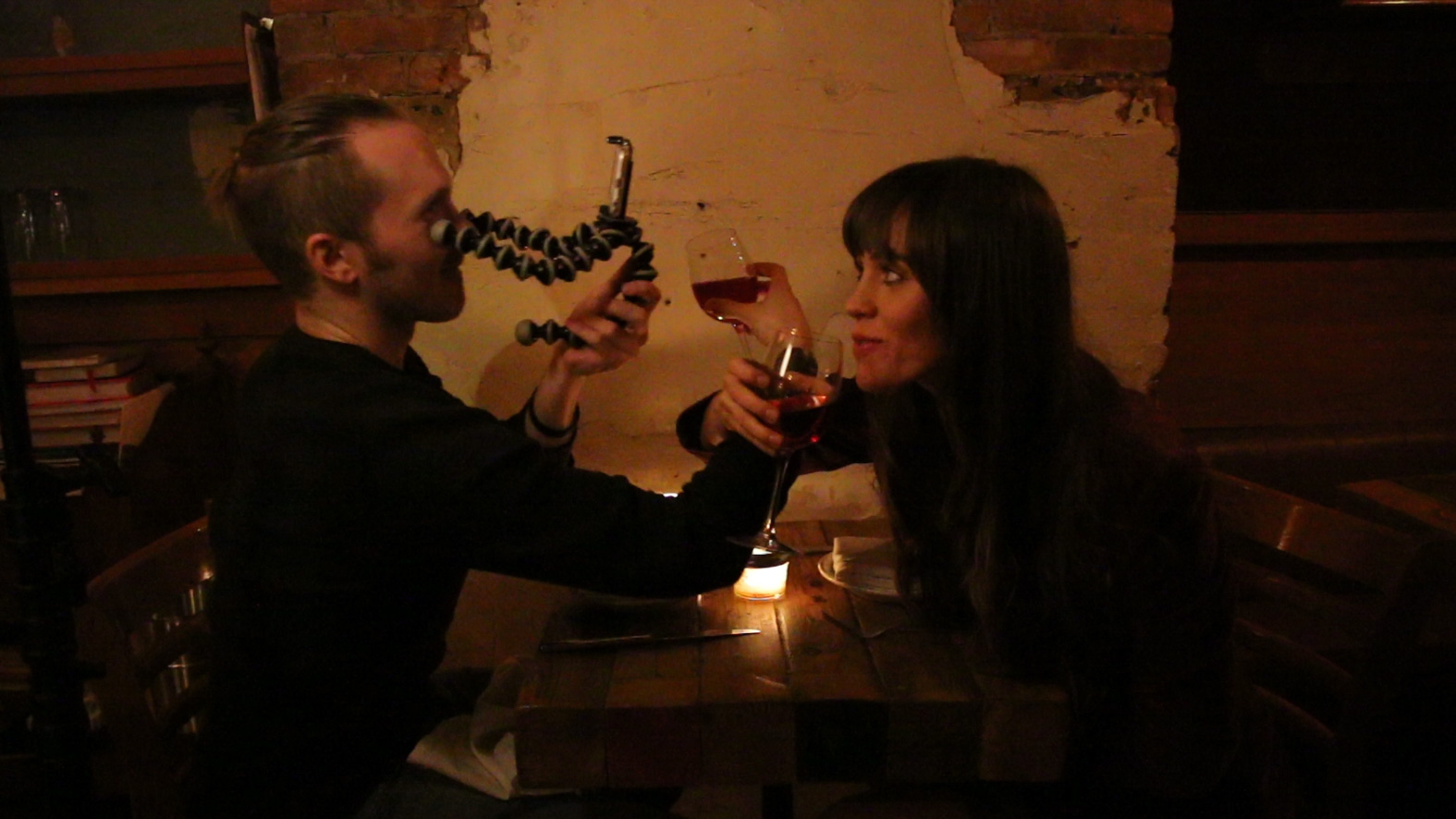 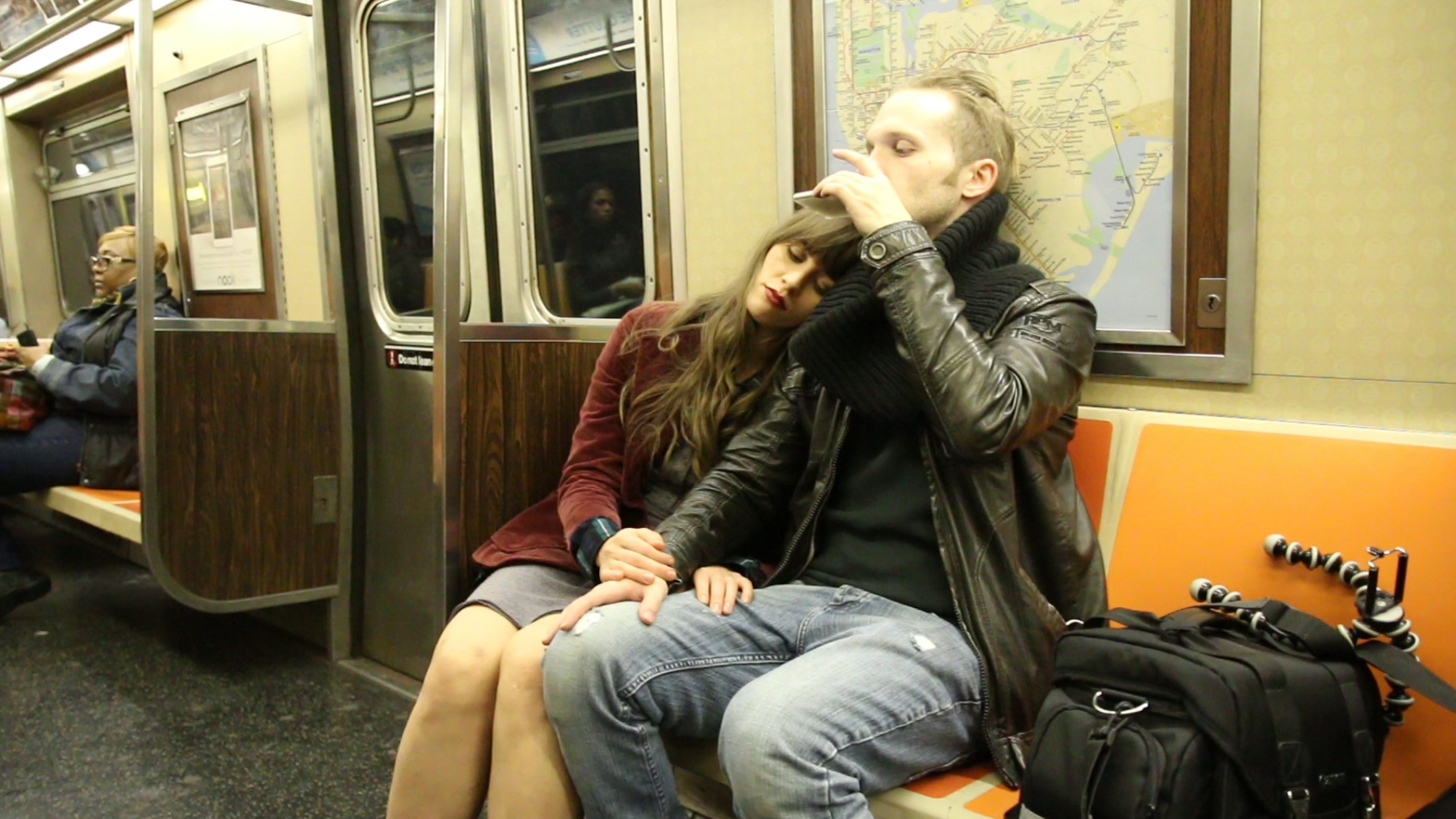 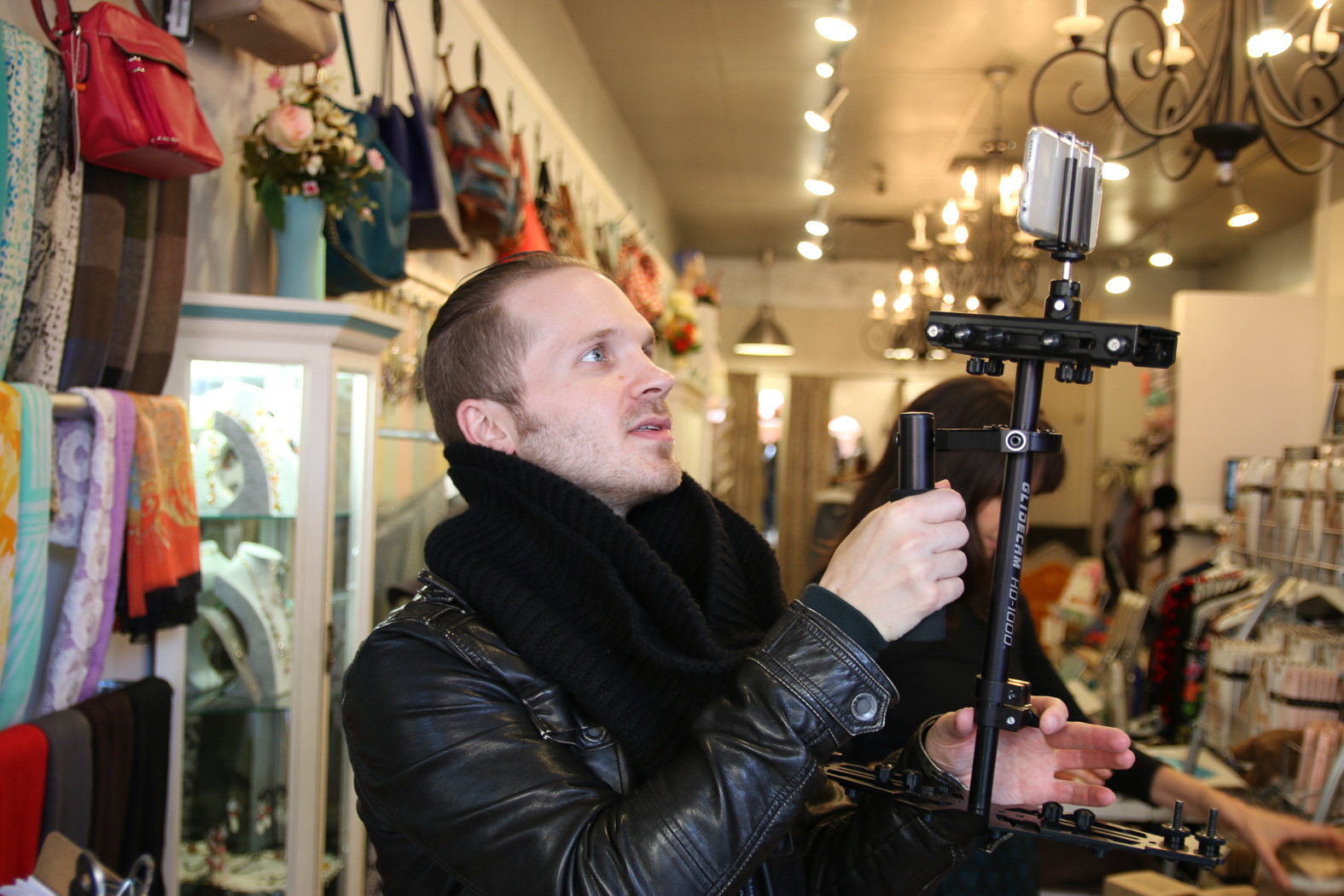 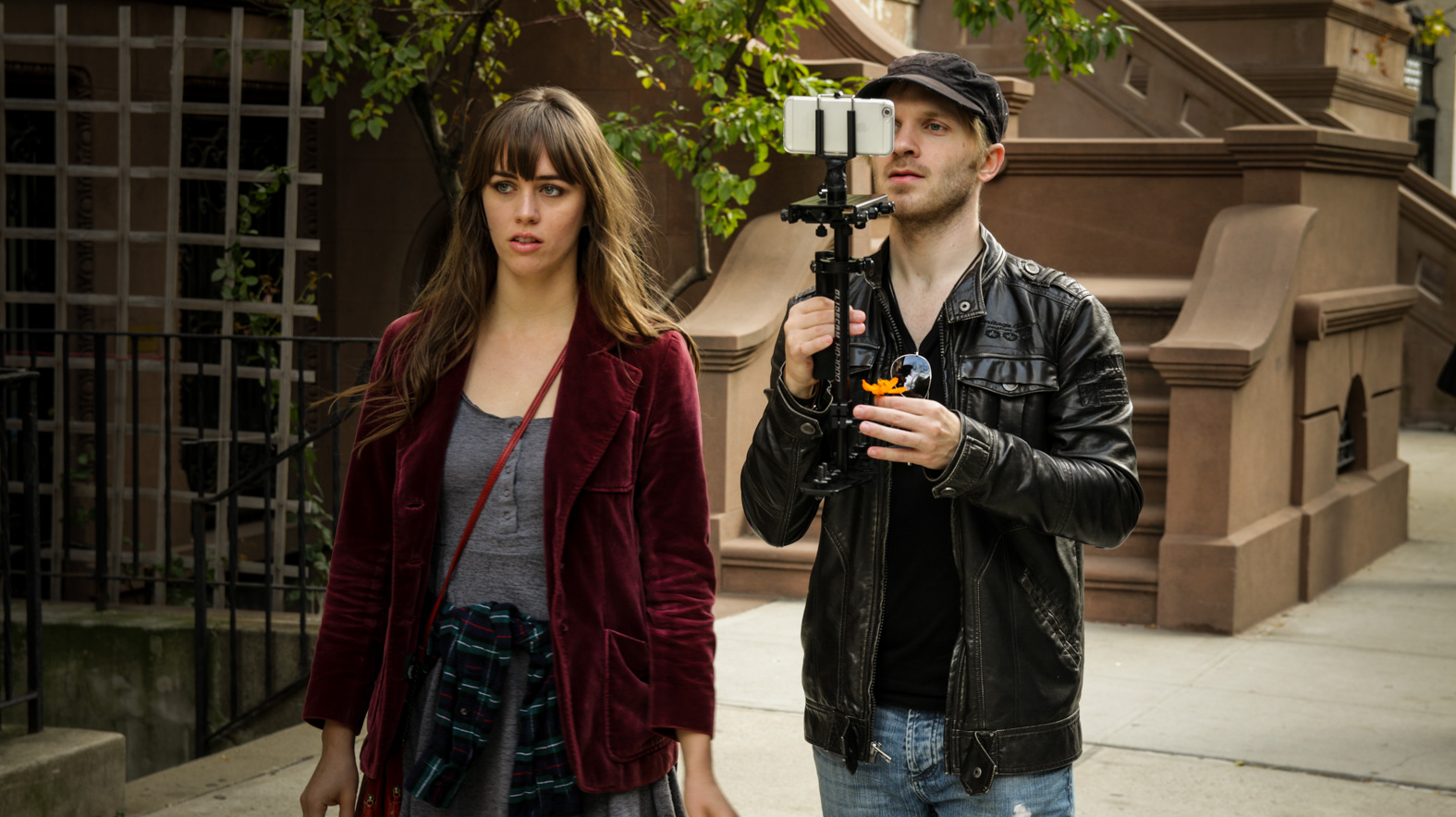 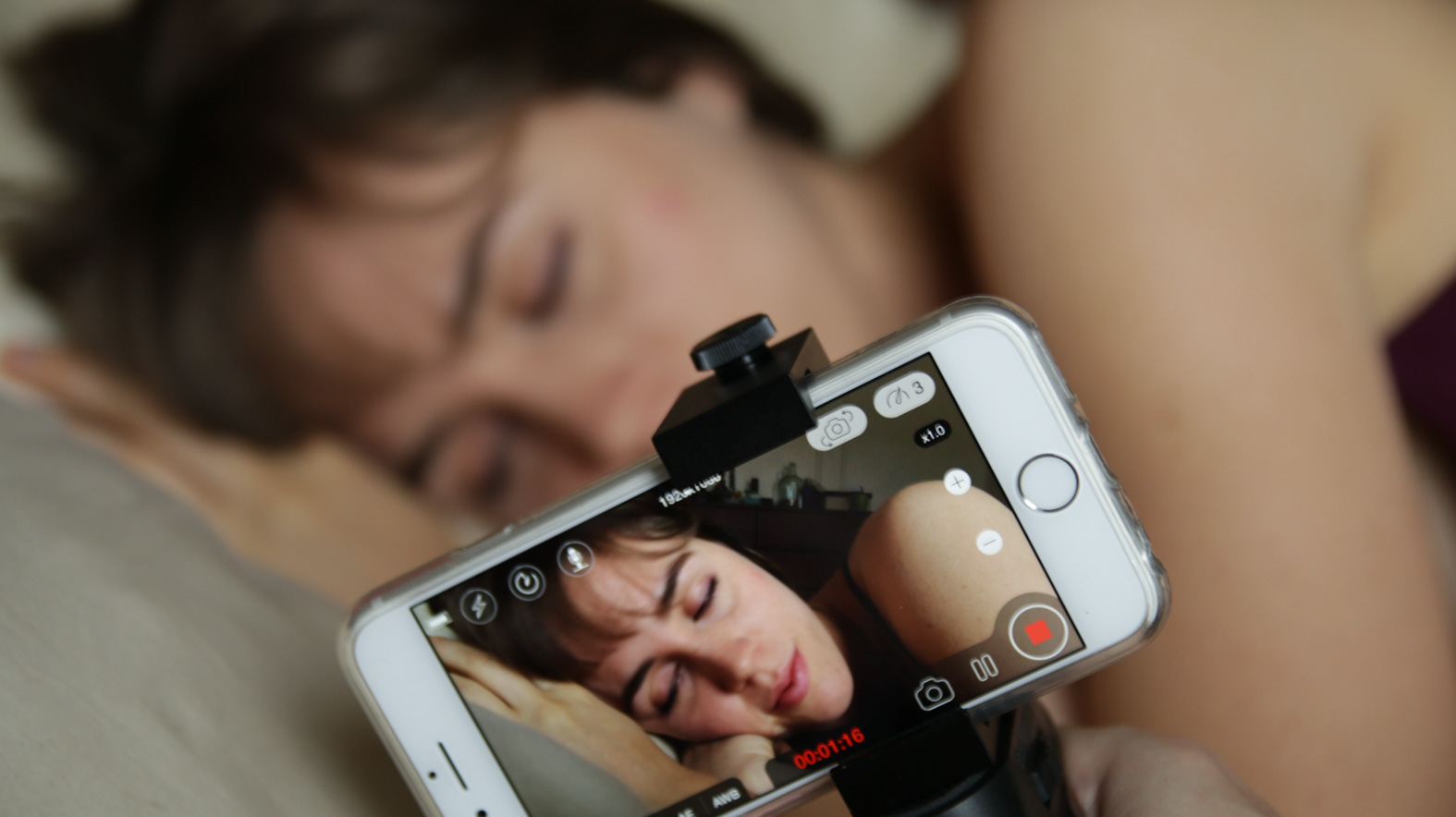 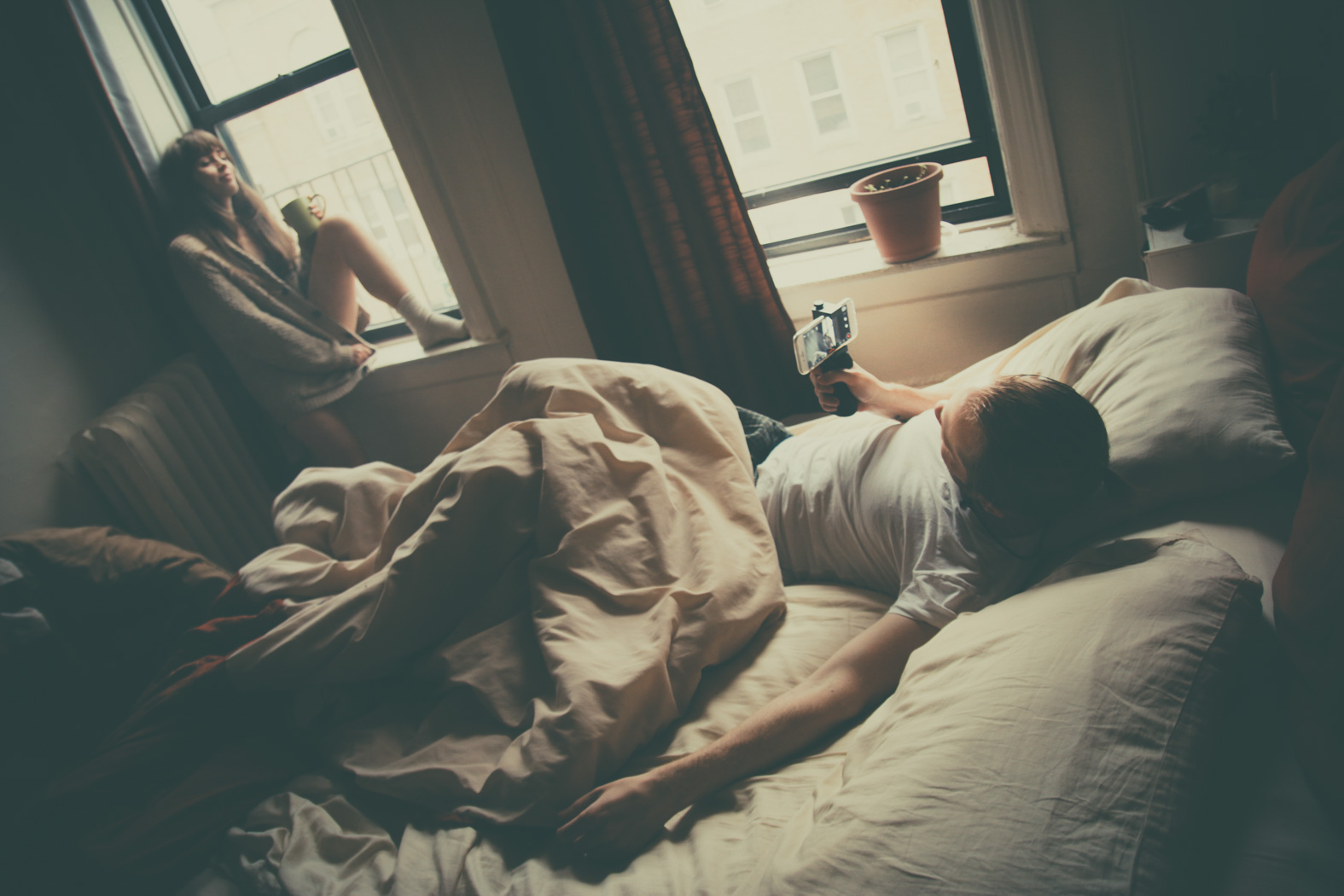 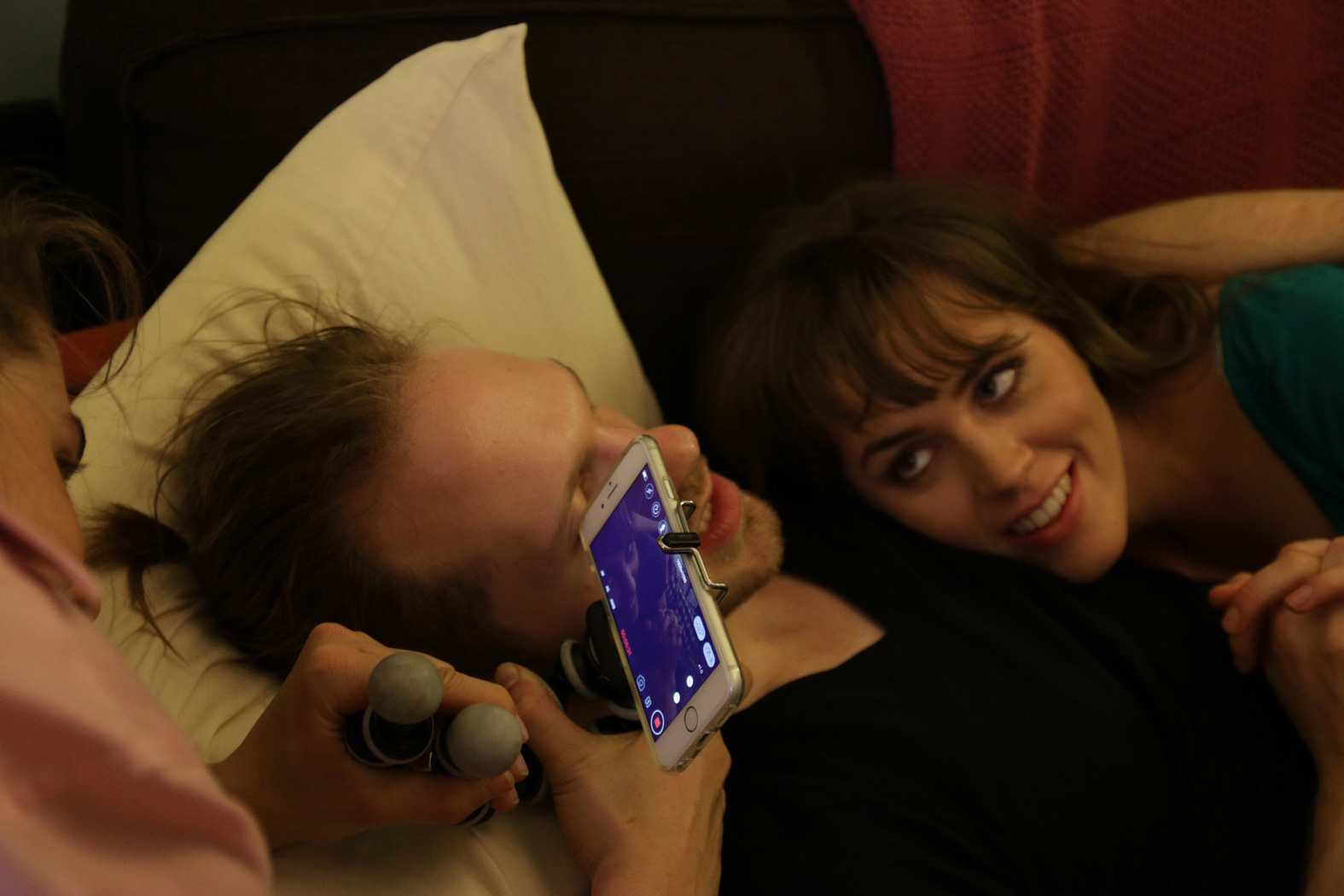 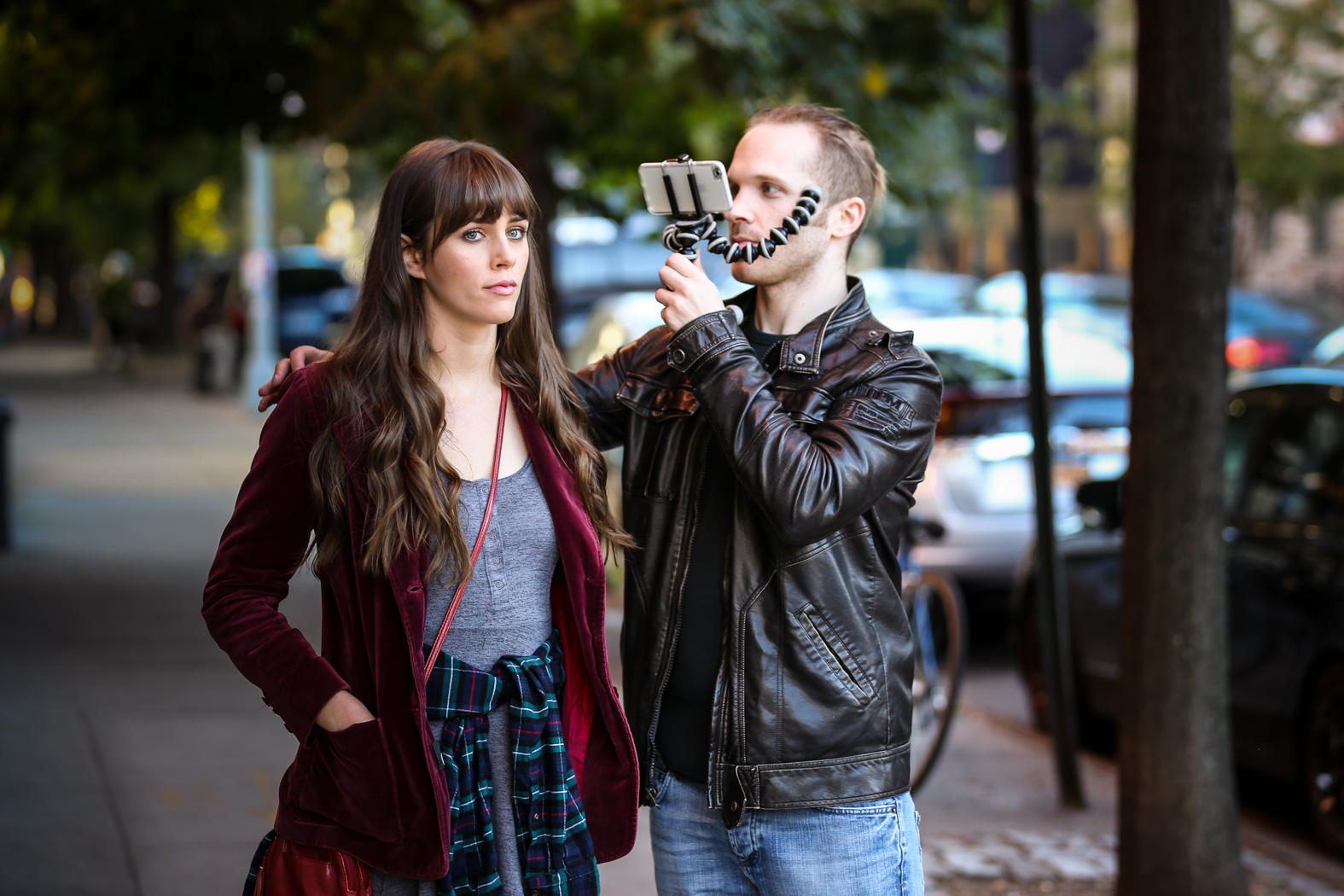 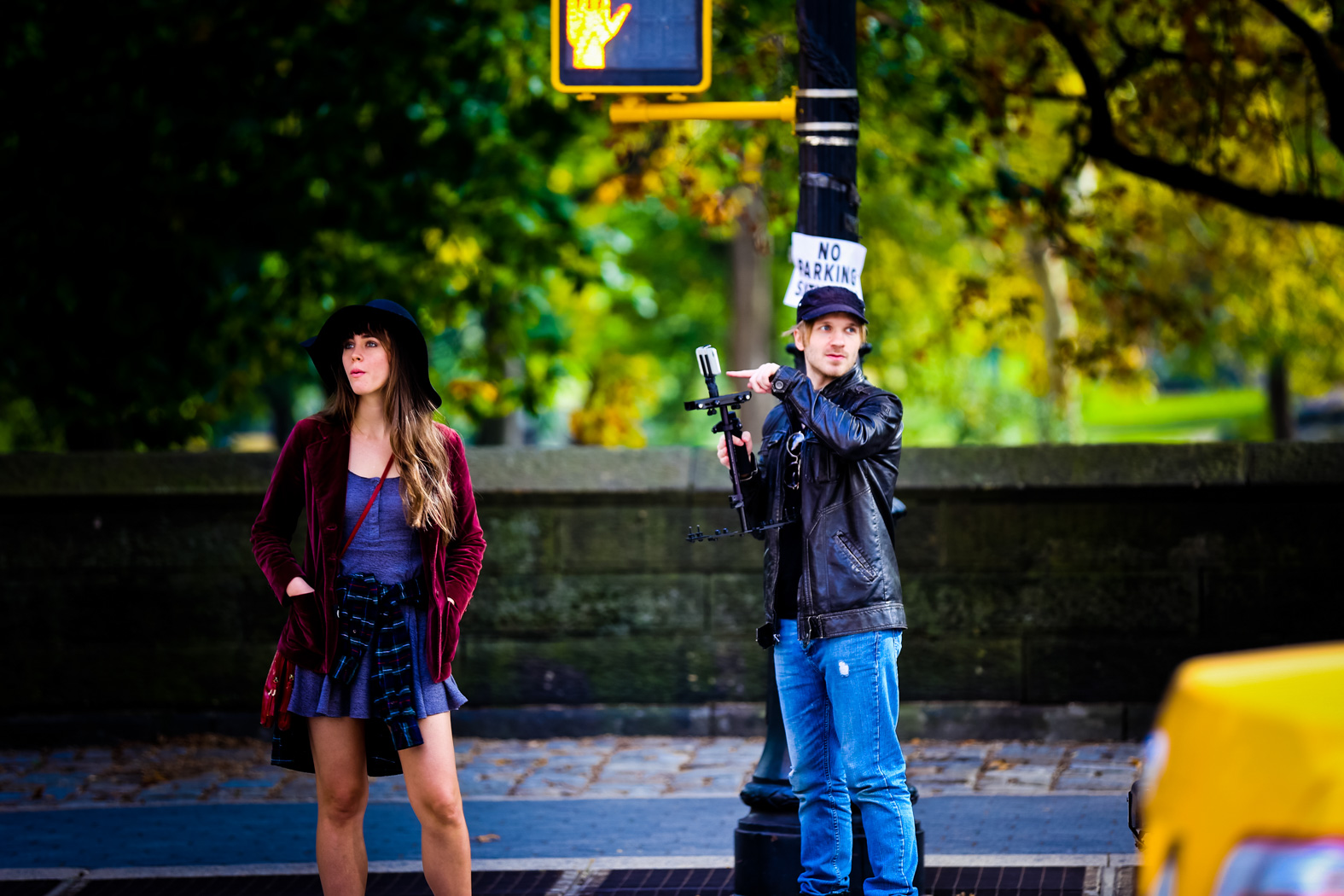 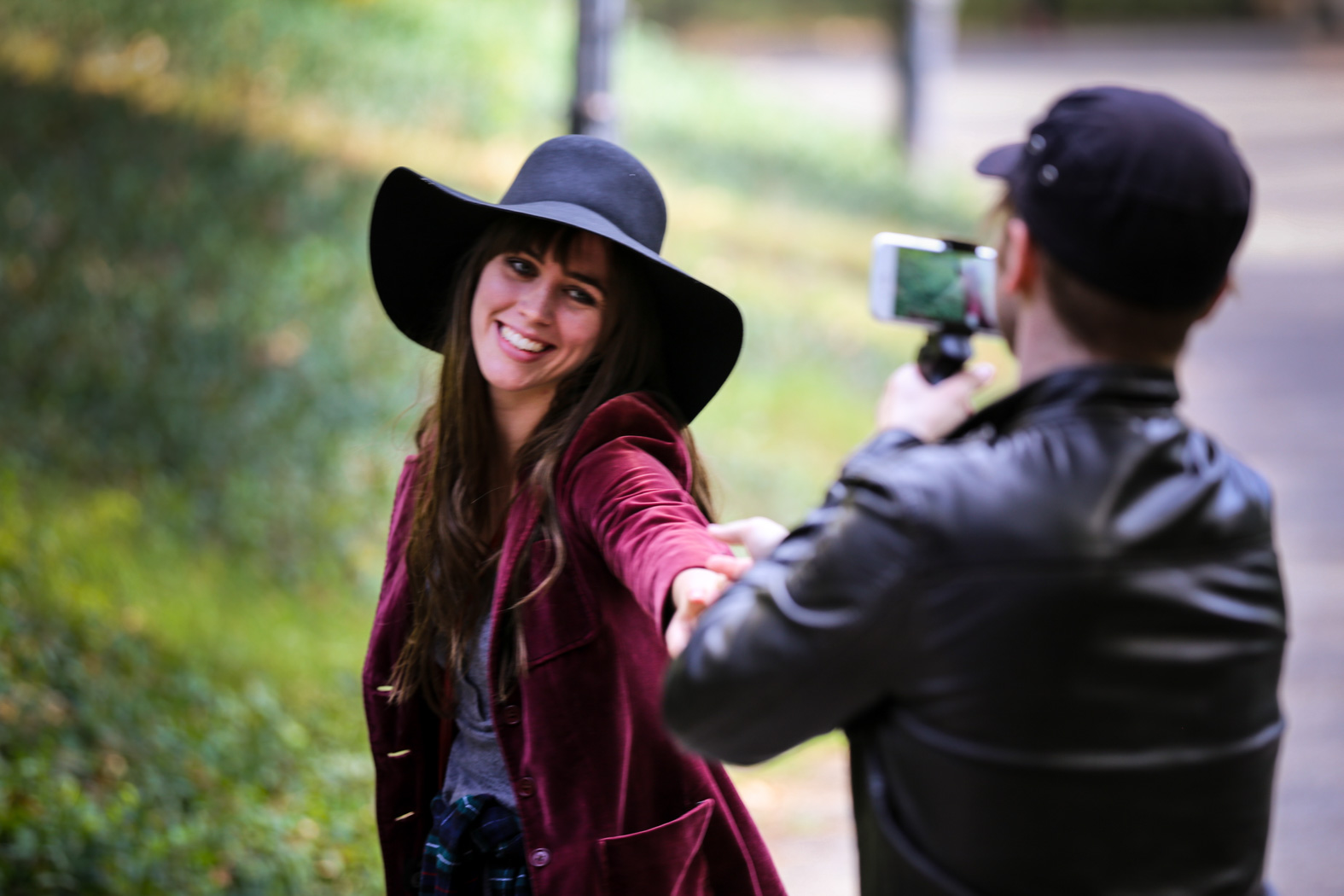 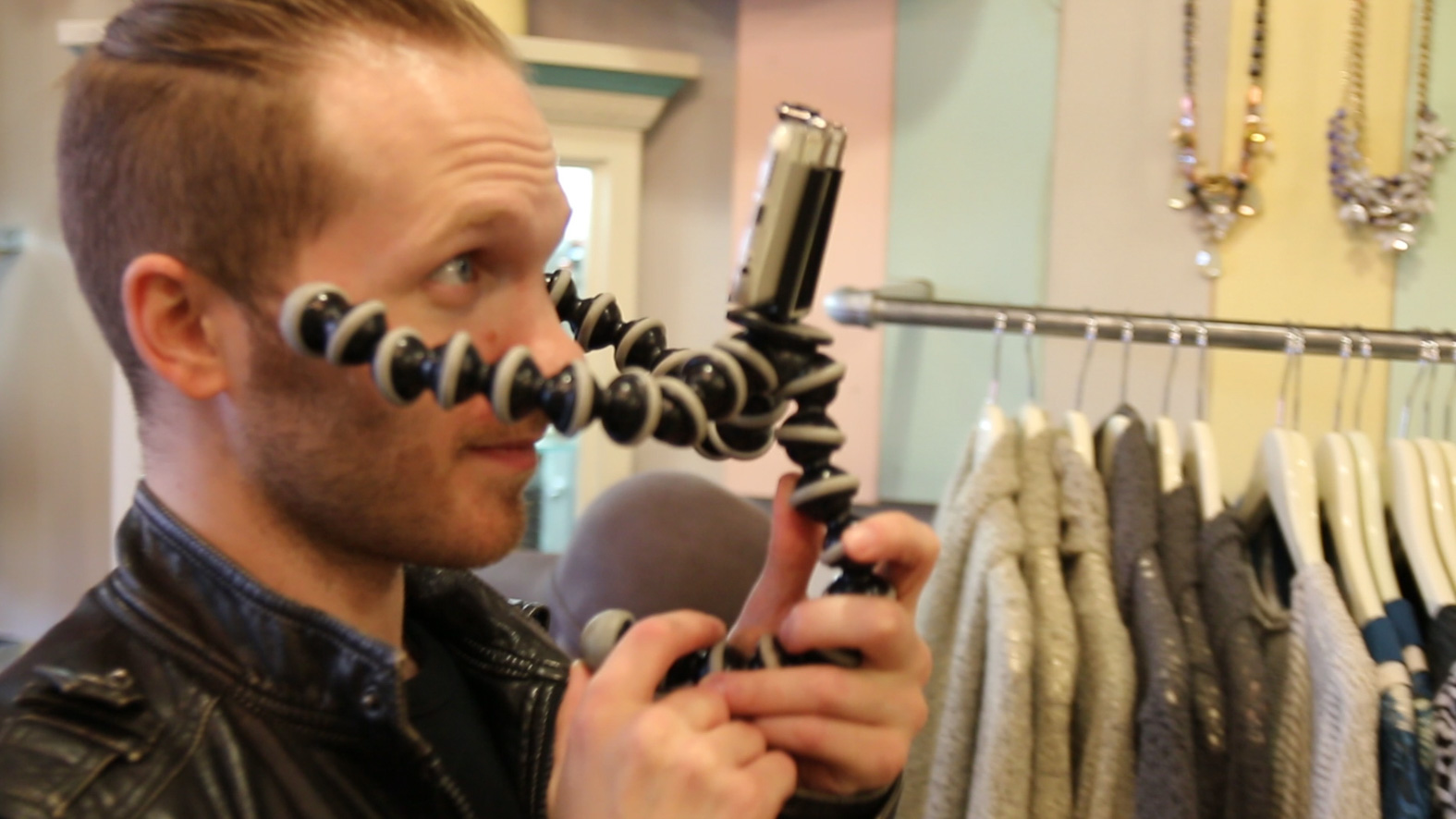