I have been asked very frequently what I would recommend as equipment to make iPhone Films. Well, here it is! A full image gallery of the equipment I own and use depending on the project. I still stick to my thoughts that the best equipment is that which fits your specific project. But if you want it all; here is a great starting point!

I plan to add some rail systems and 3 axis gimbals to the mix soon to accommodate the Beastgrip.

Here are some more photos of all the equipment. As you can see, even when shooting on an iPhone or mobile device it is important to have the proper equipment, filmmaking 101 knowledge, and know how to apply it. However your equipment gets smaller, is easier to travel with, and can spur some truly creative shots! 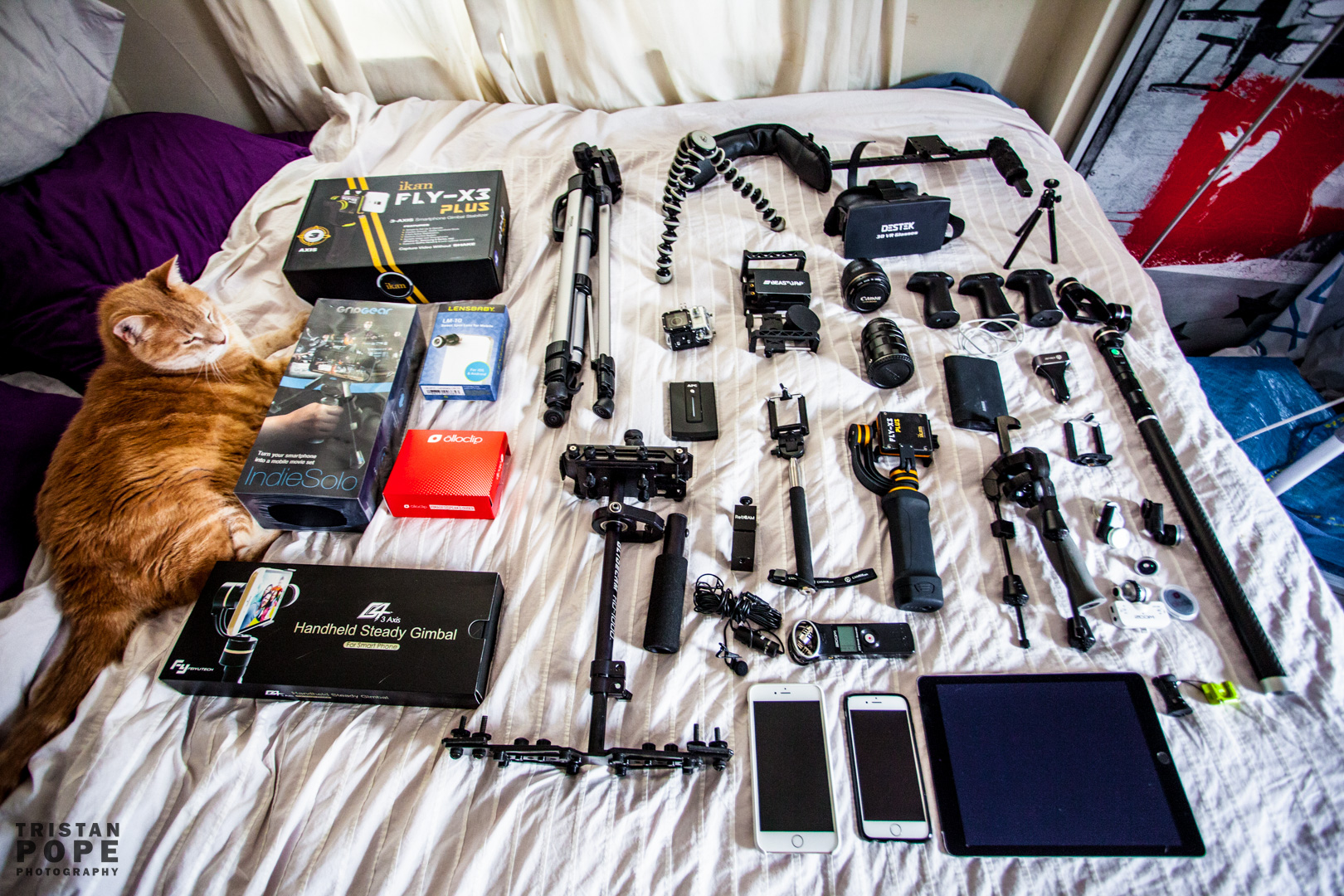 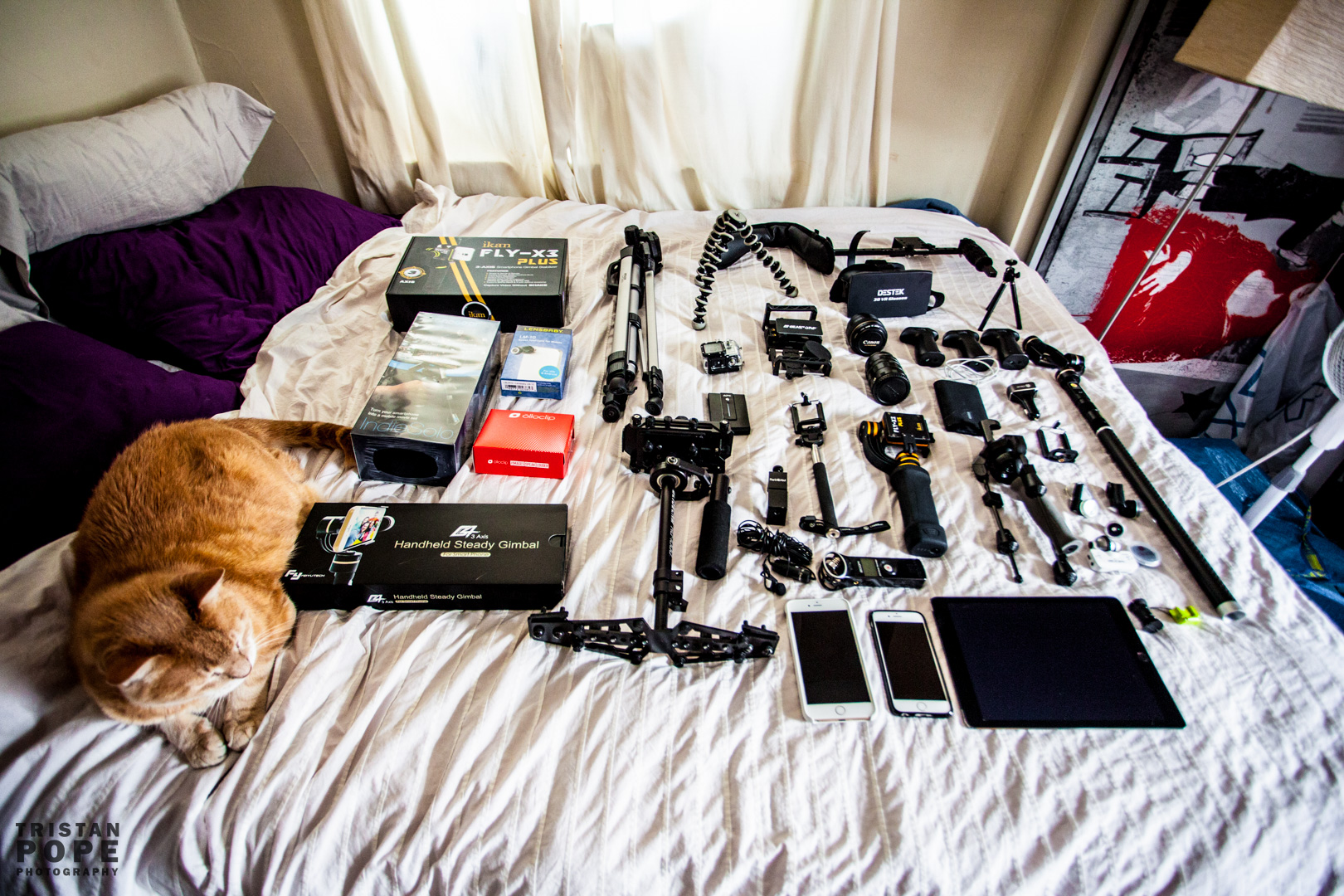 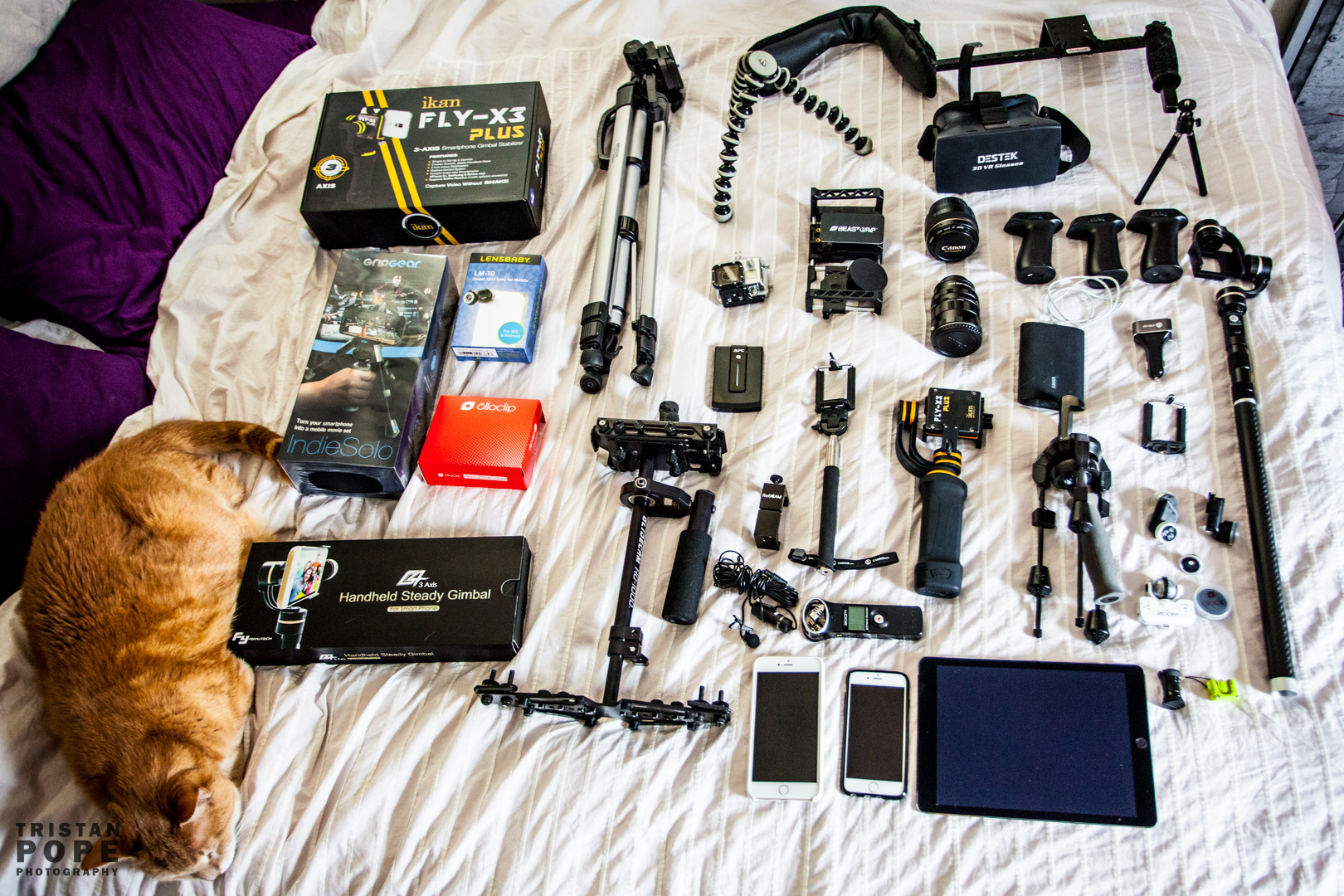 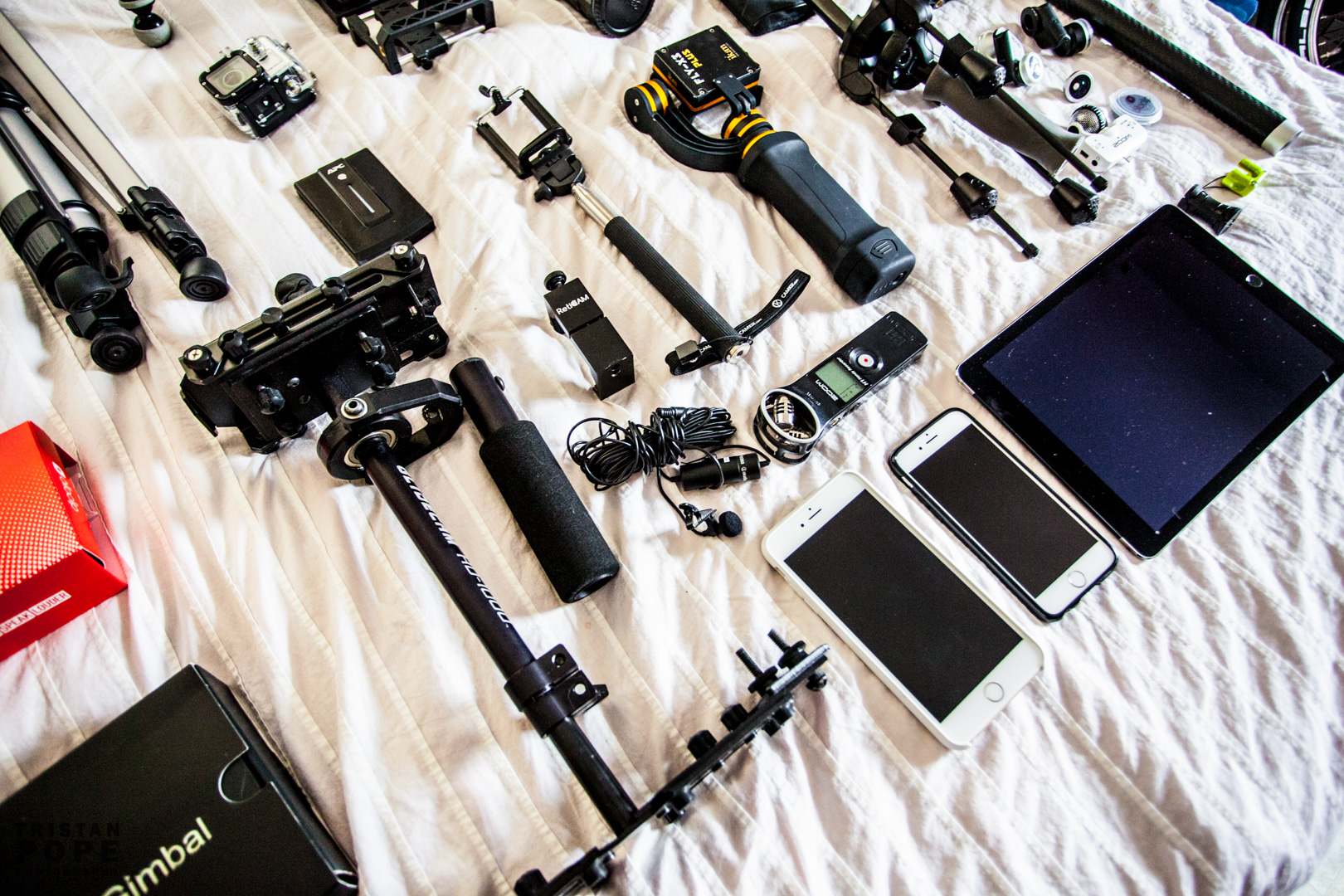 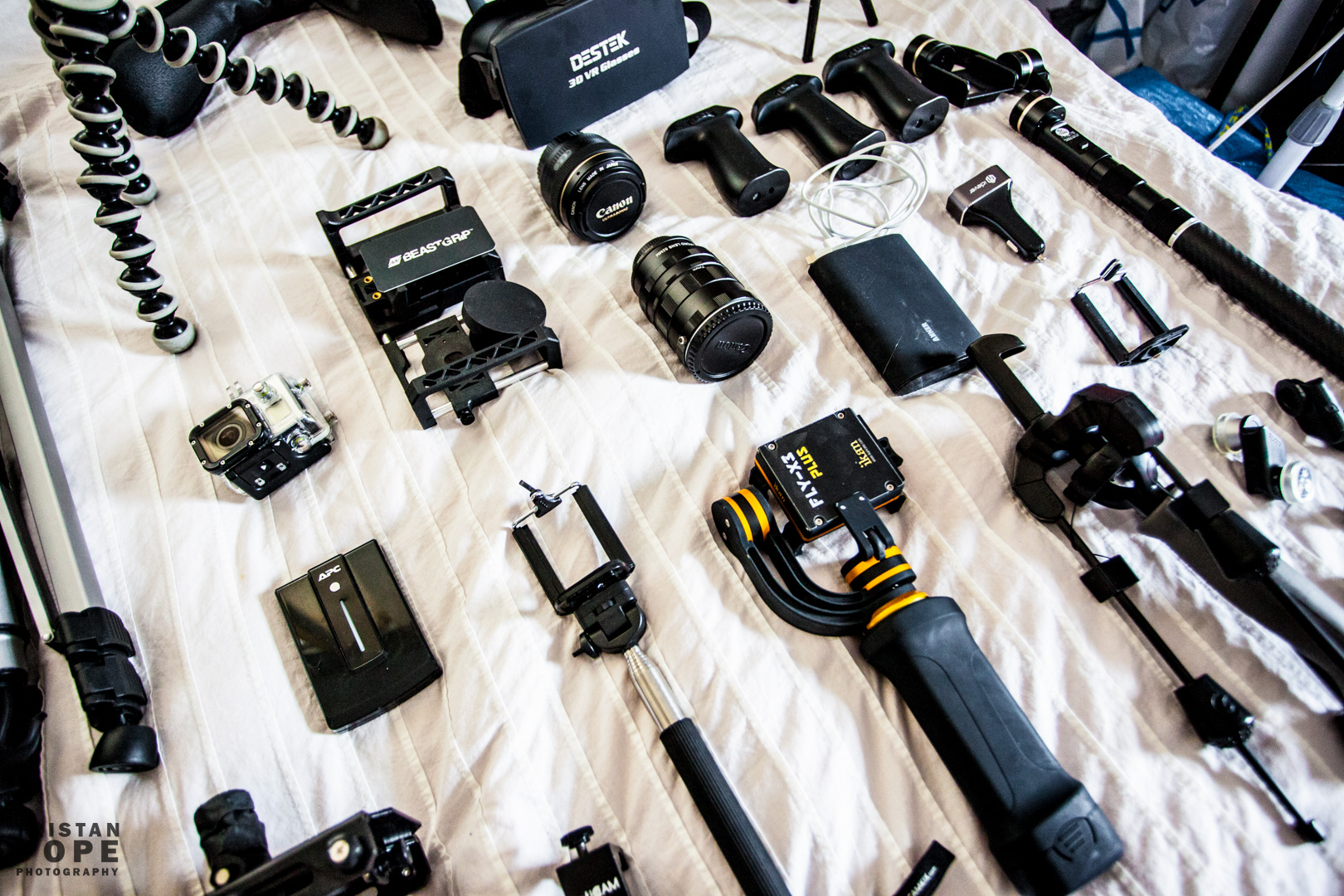 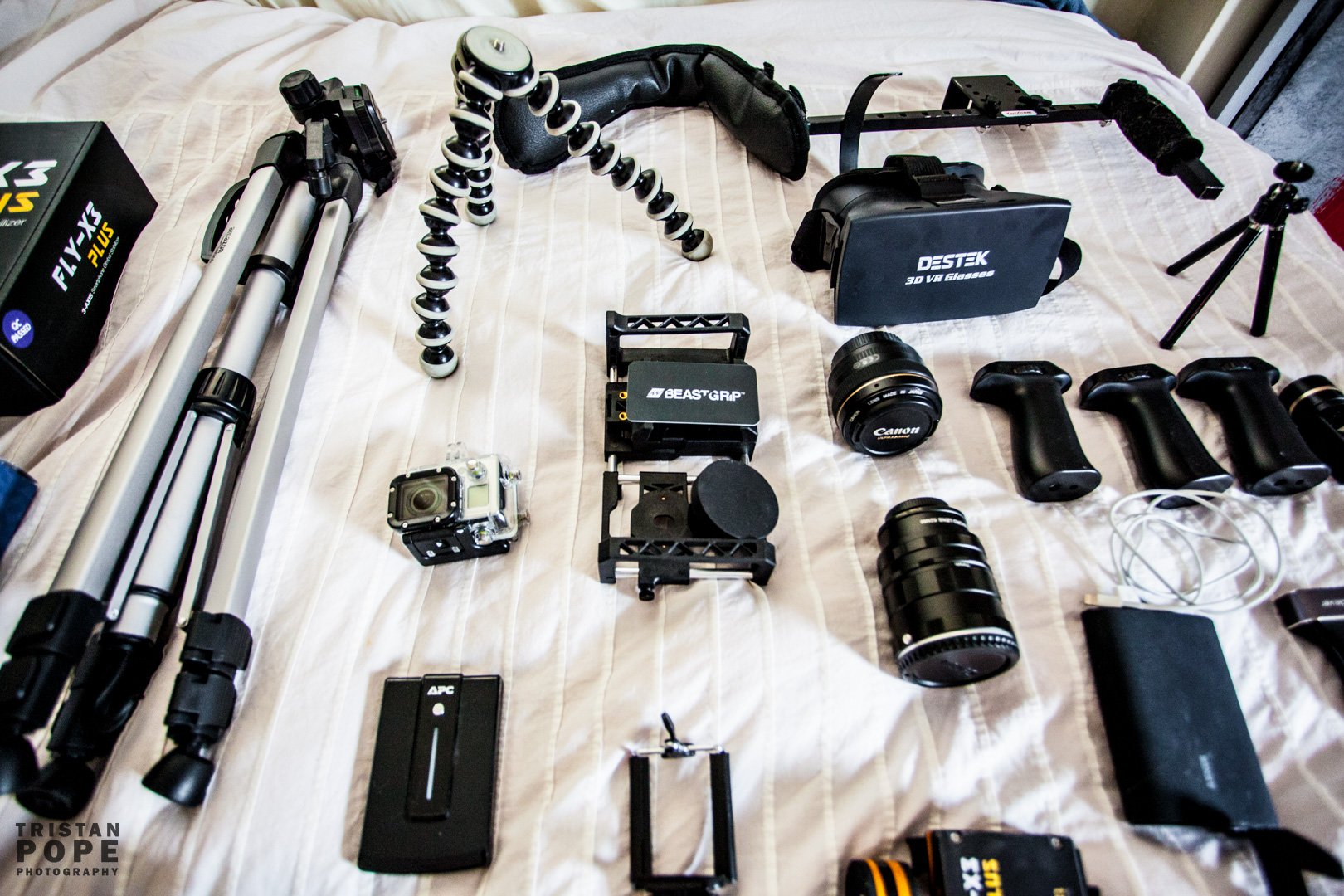 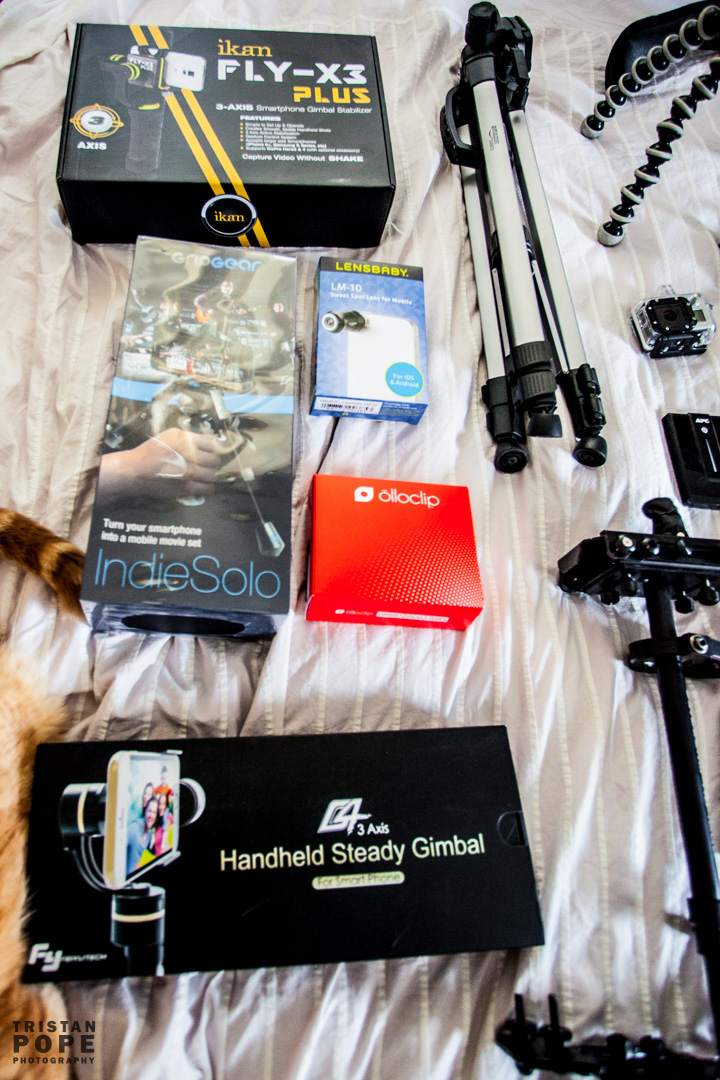 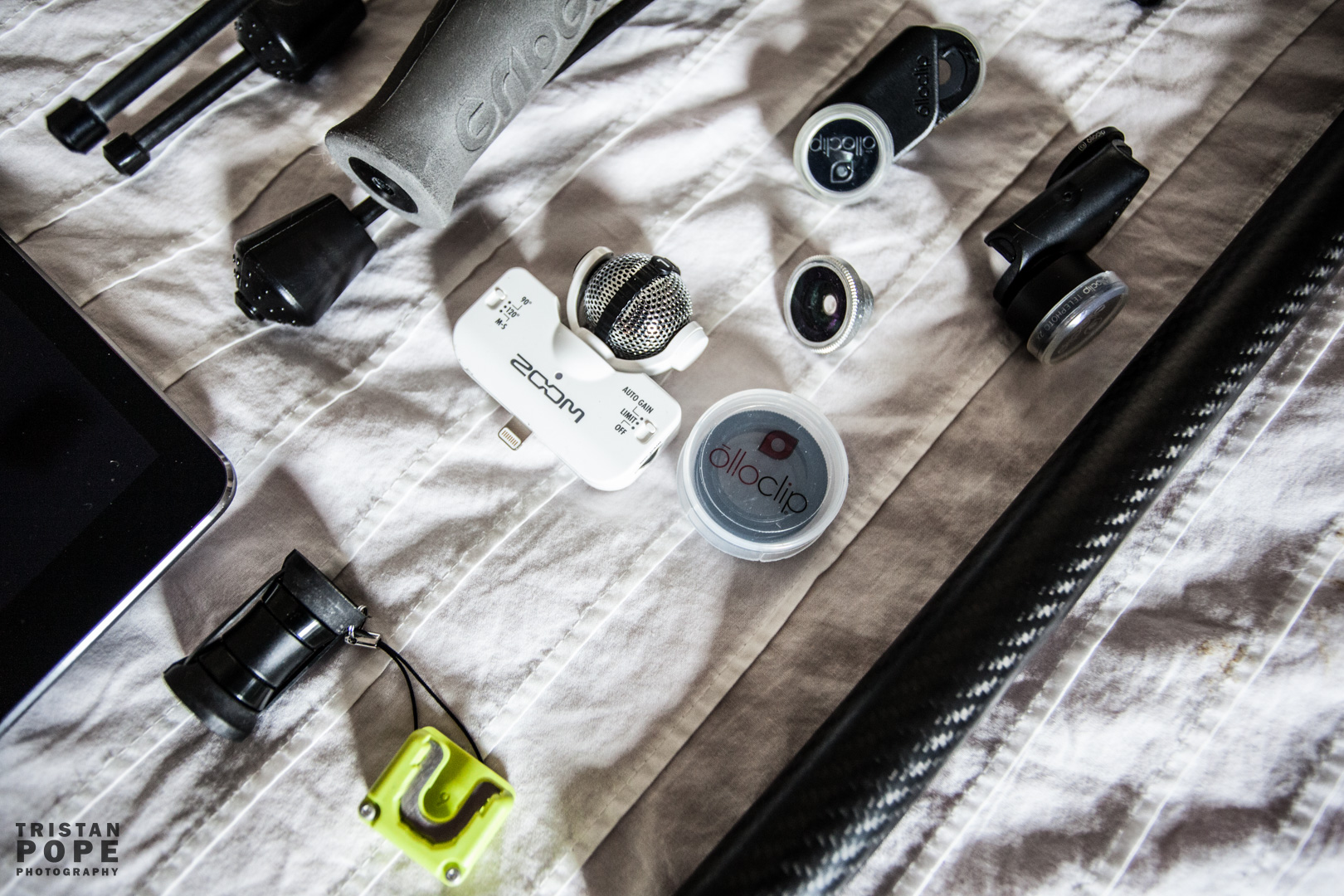 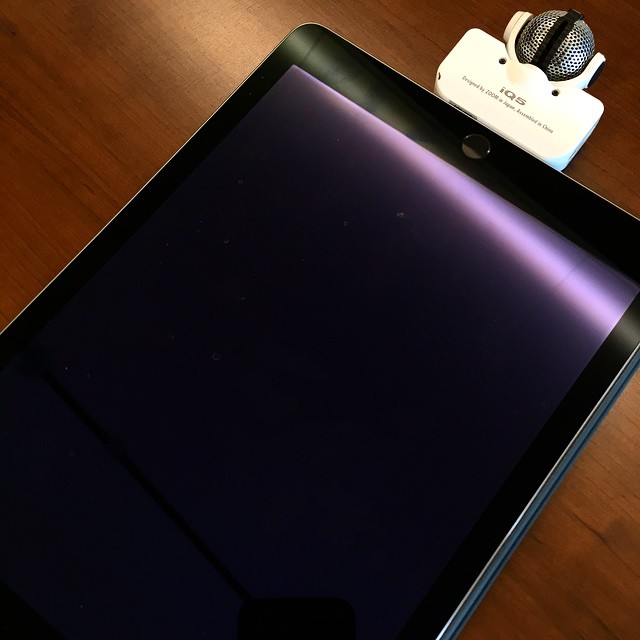 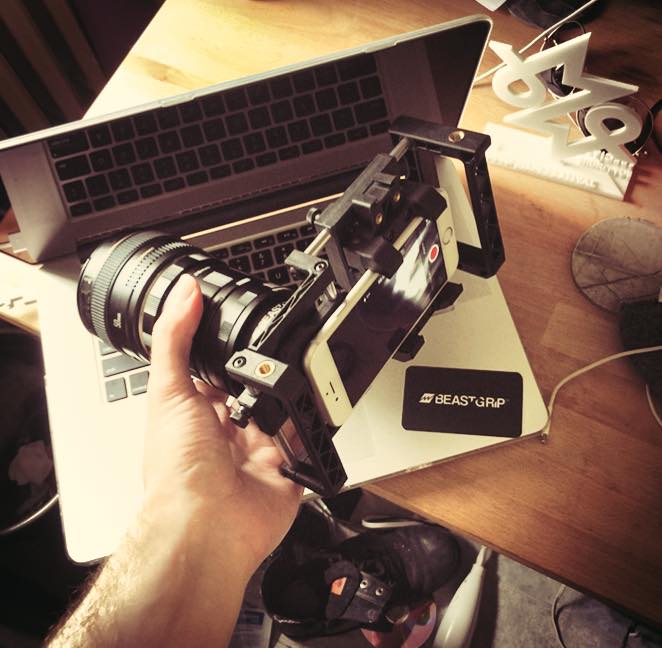 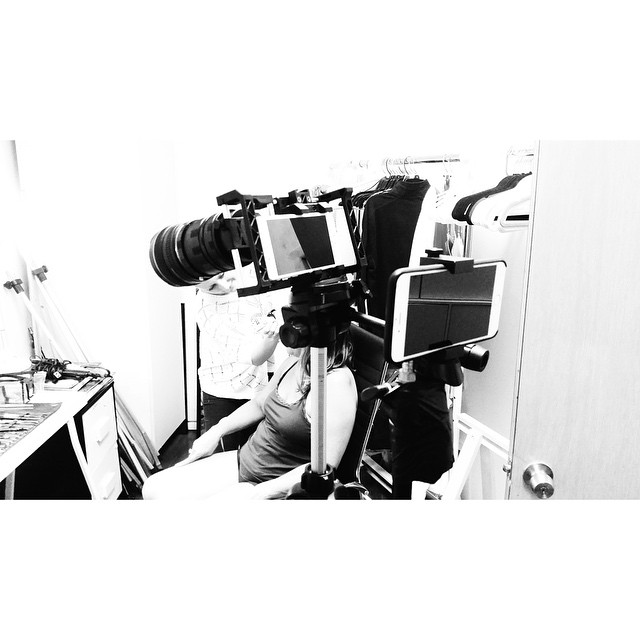 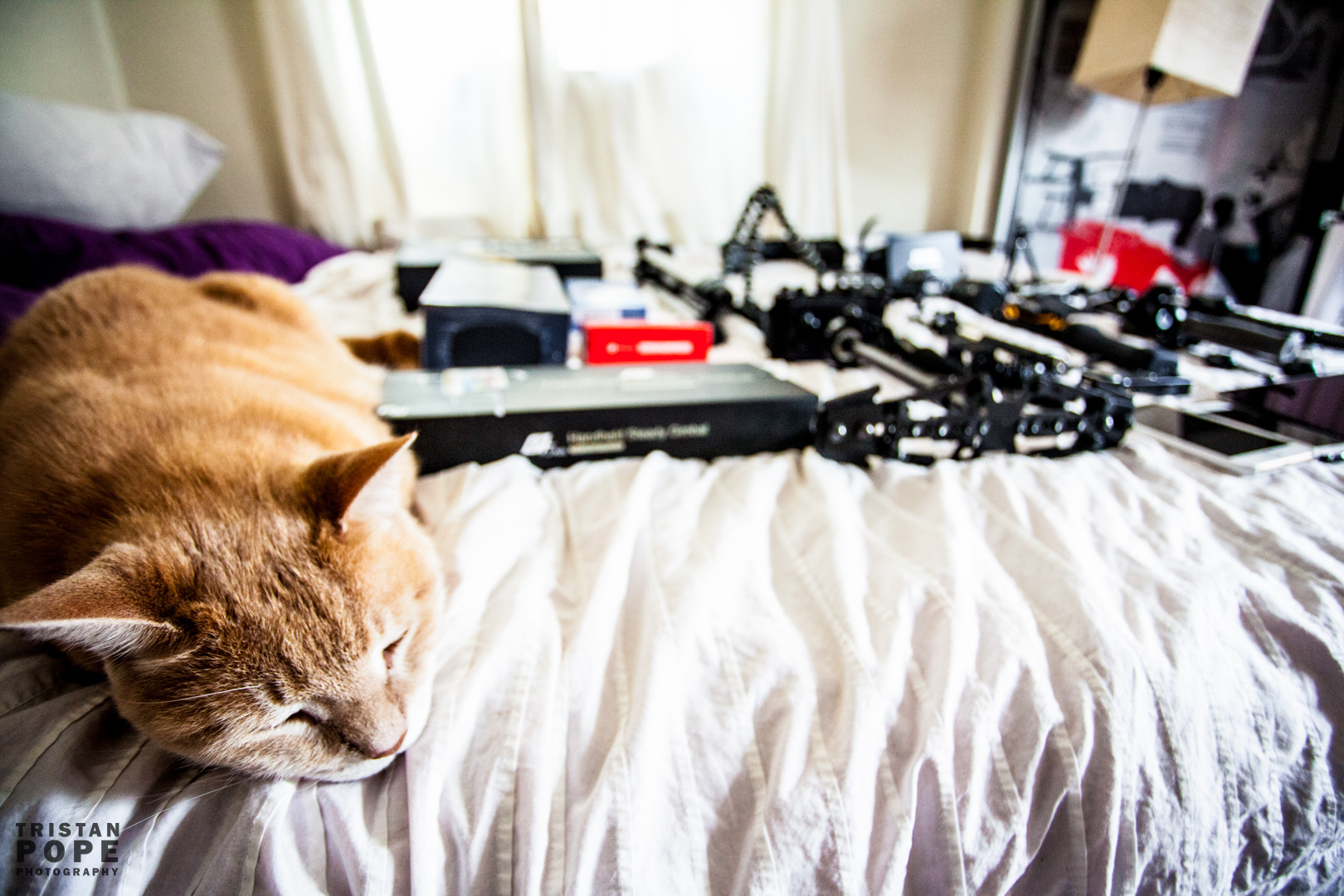 This has been quite the week for Romance in NYC, our short film shot ENTIRELY on the iPhone 6. We had been tracking all the wonderful articles in the behind the scenes post, but we just got news of all the ways it made it’s way around the world! So here is as much of the international coverage we could collect for the world to enjoy love via Romance in NYC!

Macsoluciones
“Romance in NYC”: do much with little on Valentine’s Day
http://www.macsoluciones.com/noticias/ver-todas/62-iphone/2554-romance-in-nyc-hacer-mucho-con-poco-para-el-dia-de-san-valentin

Wayerless
“Romance in NYC”: a short-film filmes on iPhone 6
https://www.wayerless.com/2015/02/romance-in-nyc-un-cortometraje-filmado-en-iphone-6/

Pacmac
Enjoy Valentine’s Day with a short film made with iPhone
http://pacmac.es/san-valentin/

​I don’t actually have any to name off the top of my head. I may be ingrained in the industry but I have always created because it was motivated by a feeling, idea, or mood. Sure I may watch things like Band of Brothers for inspiration, but I try not to idolize nor watch too much to replicate because I want to develop my own feel. Sometimes I end up creating something that mirrors something someone has already done, to me that is OK because we all get inspiration from one another but I don’t go out of my way to study someone else’s techniques. I am a trial by error kinda person.​

FashionTime
One day of a couple’s life: how to shoot a video
http://www.fashiontime.ru/lifestyle/equipment/1245019.html
Posta Magazine
Gift idea: mini movie on iPhone as a gift or the most original “Valentine”
http://posta-magazine.ru/lifestyle/mini-movie-as-a-gift-on-valentines-day
Mobiltelefon
Romance New York – movie-Valentine shot on iPhone 6
http://mobiltelefon.ru/post_1423838601.html
Urpur
Love in New York or when your Valentine is worth an Oscar
http://rnd.urpur.ru/statya/lyubov-v-nyu-jorke-ili-kogda-valentinka-dostojna-oskara/

I have had a lot of inquiries about the equipment used in Romance in NYC after releasing this behind the scenes video:

You can purchase all of these items here:

What we found when shooting this film was that the process of making the film was almost as exciting as the film itself. We wanted to share that with you.

So please enjoy an Exclusive Behind the Scenes look into the process of shooting an intimate and candid story about everyday love, shot entirely on the iPhone 6 to capture even the tiniest nuances of

Read our interview with Mashable HERE!

In 2015, it’s no longer uncommon for filmmakers to use smartphones instead of film cameras. Still, only over the past few years has the quality of the cameras, lenses and app software become so impressive that phones can be used to capture DSLR-quality cinematic moments.

Filmmaker and photographer Tristan Pope is one of these artists — and he used the new iPhone 6 to do the job.

Read our interview with SlashGear HERE!

If you still needed convincing that smartphone cameras are more than capable of professional results, “Romance in NYC” may do the trick. Shot not only entirely from the a single character’s point of view, but using nothing more than an iPhone 6 and a selection of apps and accessories, the 15 minute short was crowdfunded on Kickstarter in late 2014 and is now making the rounds of the festival circuit. I caught up with director Tristan Pope to find out what made him put down his pro-camera kit for a smartphone, how the iPhone 6 delivered in unexpected ways, and why he ended up wearing a GorillaPod like a Hannibal Lecter mask.

Read this article over at IndieWire

This Emmy Award-winning director and photographer shot his latest film, “Romance in NYC” on an iPhone 6. In this guest post, he explains why and how he did it.

Read this article over at Boing Boing HERE!

I love my iPhone 6+, and have been shooting, editing, and publishing lots of glorious video with it, on the road.

I really enjoyed seeing Tristan Pope‘s behind-the-scenes exploration of how “Romance in NYC” came to be. “The iPhone has limitations,” he says “but the limitations themselves spur creativity.” Couldn’t agree more.

Read this article over at iMore!

Romance in New York, by filmmaker Tristan Pope, takes the point of view of a boyfriend waking up to spend the day with the love of his life. Pope wanted to show the intimacy that comes from everyday moments, and the subtleties and nuances that exist in every expression and every action, even the ones that might seem small. What’s more — he shot the entire 15-minute film on theiPhone 6.

Romance in New York will be showcased at film festivals around the word. Check out the trailer, above, and the behind-the-scenes video below. Maybe, like me, it’ll inspire you to stretch the limits of your own iPhone videos.

Read this article over at NYDailyNews

Just in time for Valentine’s Day, a New York City photographer and director is delivering a short film on capturing love in the Big Apple with nothing but an iPhone 6.

Read this article at InformedSauce.com

Well, what a coincidence, and just in time for Valentine’s Day! This behind-the-scenes making-of movie of Tristan Pope’s new 15 minute short film, ‘Romance In New York’, was posted online literally a few hours before I sat down at my desk, bleary-eyed, to write my previous post..

Listen to our interview with The Bloomberg Advantage Radio show at Bloomberg.com

Follow the entire story from conception to kickstarter here: kickstarter.com/projects/165580313/romance-in-nyc-shot-entirely-on-the-iphone